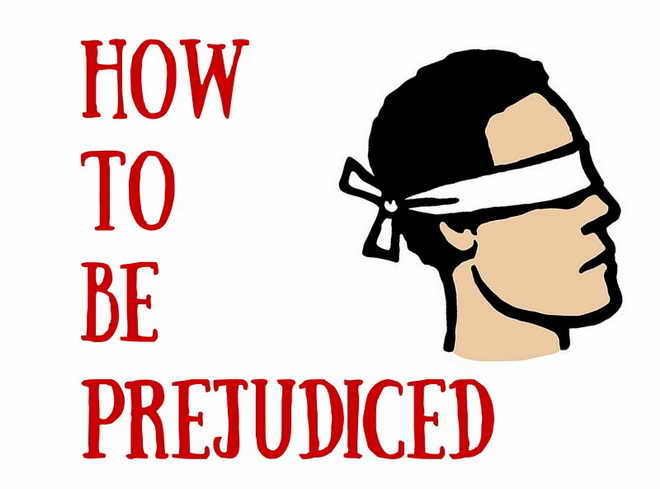 How to be prejudiced!


Years ago when I worked as a counsellor Eileen (not her real name) came to see me.

As she saw it everything was wrong in her life. For example, like me she had come to the UK from Ireland and I still remember the moment when she made the immortal comment "Of course, I don't need to tell you about the discrimination and prejudice that we have to put up with!”

At this stage I had lived in the UK for about 25 years socialising with and working with English people. In fact, when I first came to the UK I spent about a year working on London's buses encountering hundreds of people every day. And I had not, nor have I since, experienced any prejudice whatsoever towards Irish people.

But Eileen had! In fact according to her, she experienced it all the time.

Isn't it curious that...

It's a bit like the New Car Phenomenon. For years you've driven, say, a Ford Escort and then you buy a Renault Clio. And suddenly you discover that nearly everybody else has gone out, overnight, and bought a Clio! Of course, they haven't. They were driving around in these vehicles before - it's just that you didn't notice this. But because you are now tuned in to Clios you see them everywhere.

In the early 80 I bought my first computer - an Amstrad PCW. So I went to the newsagent looking for a magazine on computing. Now I 'knew' there wouldn't be any in stock and that I'd have to get one on special order. Because I'd never seen any on display previously. But, guess what? The newsagents must have known I'd just bought a computer - because, suddenly there they were - were whole shelves of computer-related magazines!

Have you ever noticed

Then there's the 'It's going to be One Of Those Days' phenomenon. Your day doesn't start off too well; one or two things go wrong and you say to yourself "Oh no, it's going to be one of those days!"  And, of course, you're right: you notice that suddenly the world has conspired to make today difficult for you. As you get ready to go to work you can't find things that you normally have to hand. On your way to work you are delayed by anything and everybody. When you get to work people's moods have changed and they're unpleasant or grumpy or distant. And so it goes on.  Until tomorrow when you don't have One of Those Days and everybody acts normally again.

Then there's the thing about...!

Or how about the "Bad Things Always Happen In Threes” one? A bad thing occurs and you ignore it. Another one occurs and suddenly you remember the first one. And you think to yourself “Here we go, bad things always happen in threes - what's going to happen next?" And, sure enough, before long you're proved right and something else goes wrong. They always happen in threes, you know!  But, here's the catch: now that your expectations having been satisfactorily fulfilled, you stop keeping track!  And the bad things stop happening!

Are you getting the pattern here? We set ourselves up for self-fulfilling prophecies. We select our myth for the day or, worse, our myth for life and then go out looking for evidence to support it! And find this evidence everywhere, in abundance.

How to be prejudiced

It's very easy to be prejudiced - much easier than having to think things through for yourself. There really are just three steps:

1. Find a target - plus a reason to hate or fear them

3. Find fellow believers - to reinforce your prejudice and so you have a ready-made group of new friends

Nothing to it, really!

If my Prejudice is that Purple People are untrustworthy, or lazy or violent or whatever, I will begin seeing Purple People behaving in the way.  Because I have set my mental filters to do this. Yes, I may come across Purple People who do not behave like this but I'll be blind to these 'exceptions to the rule'. Now with filters set to find supporting evidence my Prejudice goes from strength to strength.

There too many foreigners in this country.

Young people today are lawless and out of control.

The world is a dangerous and violent place.

My town is a dangerous place.

Old people are boring. Young people are drug-crazed and up-to-no-good

The jobless or the homeless are scroungers.

Then there are the Myths-About-Self. If my Myth for Life is that people don't like me I'll find lots of evidence to support this. I'm useless. I'm losing my memory. No-one likes me. I am not confident. I'm no good at Maths. I'm too tall, small, fat, skinny, ugly, etc.

How about Myths-About-My-Partner? She's not much fun anymore. He's losing his good looks. I think she's having an affair. He doesn't love me like he used to.

Whatever your favourite Myth (or prejudice) you will find

lots of supporting evidence. It's a bit like having a filter in your brain that lets in the evidence which supports your prejudice and repels any evidence which might challenge it. And because you are unwittingly creating such a strong case to support your prejudice your behaviour towards the subject also changes - which then creates further and stronger evidence.

He/She's Having an Affair!

Let's take the They Are Having An Affair myth. You notice your partner seems happier lately. Spends a little more time away from the home. Takes a little more care of their appearance and so on. So you 'know' they are having an affair. Because of this you become aggressive or withdrawn. You question them more, check for physical evidence, pick up on their every comment, etc.

Now your behaviour (as it is experienced by them) has changed and they begin responding to this new behaviour. They are finding that you are not as much fun to be around - so they stay out more. Further evidence for you! They find your cross-questioning irritating and intrusive and experience it as proof of your not trusting them - so they become less frank and forthcoming. And in this way things escalate - often quite rapidly.

Pre-judging is easier than thinking!

Prejudice or “pre-judging” is an interesting phenomenon… it's the process of having ready-made opinions. The great thing about it is that it saves us having to think. We don't need to - we have our ready-made pre-judgements! I don't need to get to know you - I can tell what kind of a person you are from your size, or your skin colour, or your accent, or your religion, or your possessions, etc.

How does it happen?

We don't normally 'choose' to be prejudiced. Sometimes we develop our prejudices through carelessness. We unwittingly take on board others' pre-digested opinions - the opinions of the newspaper we read, or the producers of the TV or radio programmes we attend to, or our colleagues at work, or friends, or family (especially when we were very young).

All of our prejudices are maintained through our own mental carelessness: through not bothering to think critically and through not recognising how our moods colour our perceptions and how this begins the process of gathering supporting and ignoring conflicting evidence.

Let's say, for example, I'm irritated and frustrated with things at home or at work. And I don't want to or am afraid to confront or upset the people there.

Now, when I am out and about shopping or socialising, little things that I'd normally ignore upset me and I inwardly blame the people involved - I've found a target for my feelings. From now on I'll be on the lookout for similar behaviour from those people to 'prove' my new prejudice. And, by avoiding critical thinking, I can ignore any uncomfortable, conflicting evidence.

The Meta Model and Generalisations

In the second part of our in-depth NLP Practitioner course we explore how to use the powerful  NLP Meta Model which explains how the self-fulfilling prophecy that is 'prejudice' actually works.

In Meta Model terms prejudice is a form of Generalisations - we build a belief about someone or something based on very few examples and then unthinkingly apply this new belief to everyone or everything that is similar to our earlier few examples. And we maintain our prejudice by not paying attention to the exceptions to our rule or belief.

This largely depends on whether your prejudices are about serious or trivial issues. The One Of Those Days self-fulfilling prophecy may not be a particularly serious one. On the other hand, having a prejudice about a particular group, or race, religion, is a quite different matter. And developing a prejudice about someone that you are close to can very quickly ruin a relationship.

Use critical thinking and self-observation. Whenever you find yourself stacking up evidence against a person or group challenge yourself with questions such as:

“Is this true every single time?”

“Does every person of this type behave exactly like this?”

“Are there any exceptions to this rule?”

“Am I simply filtering and creating a self-fulfilling prophecy right now?”

The prejudice-creating phenomenon is one example of how we form our beliefs. At one extreme people will die for their beliefs - without even thinking - and there is ample evidence of this in the world today.

Less extreme is the multiplicity of small prejudices that erode our happiness, peace of mind, and relationships. It is not necessary to eradicate all of these, instantly.

Start challenging yours and, gradually, they may well fall away.