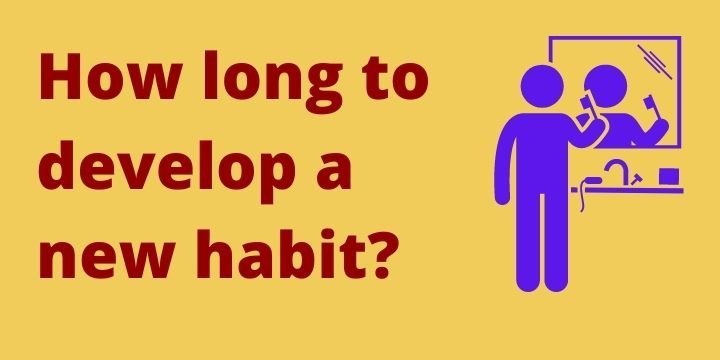 “How long will it take me to get into the habit of doing this?”

Well, the usual answer is 21 days and this is one of those myths-which-became-truth because it is so widely and unquestioningly quoted (including by myself in the distant past).

It’s based on a 1960’s observation by Maxwell Maltz, the positive thinking author and cosmetic surgeon. In his best-selling book Psycho-Cybernetics, he suggests a new habit takes a minimum of 21 days to wire-in.

More recently another widely quoted figure is 66 days. This is from 2009 study at University College London. But they then qualify this by saying for some people it takes 18 days and for others 254 days! Oh, and their observations are based on self-reports (not the most reliable source) and from that the piece of scientific evidence was based on self-reports from just 96 people.

So there’s no dependable answer.

And sometimes that’s how it is. Sorry.

However… one thing that is fairly reliable with habits is that they are best introduced early in the day. It’s because this is when we are most on auto-pilot. If you can practise your new habit in the first hour or two of your day chances are it’ll stick – if you stick with it for some weeks.

It’s also a good idea to link your new habit to an old one. Connect your habit-in-the-making to something you do regularly so the old reminds you to do the new.  For example, if you’re developing a new thinking habit, link this to checking your phone for messages.

Boost your motivation to do the new habit by frequently reminding yourself of the benefits of the change.  Be clear of something you new habit will help you avoid. And something it will help you feel of gain. Have a mental image for each of these – and linger on each, and in this order (first the avoid and then the gain), a few times a day.

Let’s say you want to make the Soft Eyes Technique a habit.

It takes seconds to use it and is a great way of relaxing yourself and others – at how, at work, or socially.

Do this for a few weeks and notice how you gradually begin remembering to use Soft Eyes – without thinking about it.