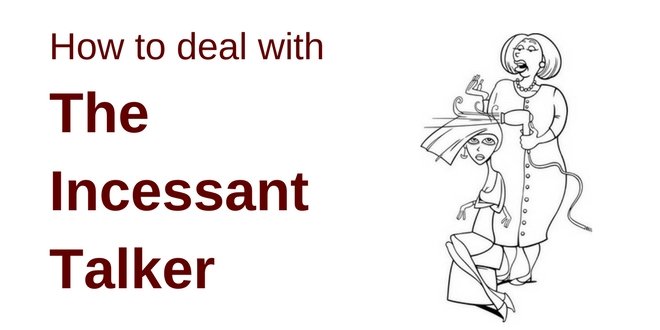 Before I began using NLP I had trouble with the ‘people side of things’. I liked being with people but I found socialising quite uncomfortable - except with a small group of close friends, .

Nowadays, with the insight and perspective offered by NLP, I can see that this was due to a lack of specific skills rather than a personality issue.

People who talk at you

My difficulty was with particular types of people and especially with the Incessant Talker. This is the person who ‘talks at you’ rather than engages with you.

They seemed to have an unerring ability to find me – even in a large group or party.

One minute I was relaxed and chatting with people – the next moment I was like a rabbit in the headlights. Bedazzled and befuddled by their flawless monologue I was trapped, unable to escape, my freedom lost.

At the time I believed these people were communicating effectively and that I was at fault for not being able to engage with them. I didn’t recognise that everyone else had the same problem and would use all sorts of skills to avoid them – one of which was to pass the Incessant Talker on to me.

You’ve probably seen those wildlife films in which the lions stalk the zebra herd on the Savannah. As soon as the lions charge the zebras panic and scatter. Once the lions had taken out one of zebras the rest of the herd would immediately relax and carry on grazing. They knew they were safe for the moment.

I used to be the zebra that was brought down. Once the Talker had locked on to me everyone else could relax knowing that Reg was too nice to upset the Talker by excusing himself! He’d keep the Talker happy for hours.

NLP provides us with the ability to ‘model’ or identify what goes on under the surface of any human activity. And applying this to the Incessant Talker’s skill we can see a number of patterns.

Once Incessant Talker gets into their stride, and this doesn’t take long since they don’t bother with social preliminaries, they display an amazing ability to talk without hesitating or even taking an in-breath.  And this is backed up by a vast store of information on any of their favourite topics.

(2) Okay, yes, a few less-than-perfect Talkers do need to pause or take a breath or search for the next piece of information. Amateurs they may be but they invariably have a backup skill for such eventualities They fill such brief pauses with elongated comments (and another thing….. what’s more…) or noises (errrrrhhh, emmm or ahhhhh) to ensure you neither escape nor, equally important, get to talk.

(3) Oh, and if you should somehow manage to interrupt their flow and get a word in they have a another fallback strategy. They momentarily give way, look at you distractedly as you mutter your nonsenses, and the moment you hesitate they carry on where they left off – as if you hadn’t spoken.

(4) Another part of the Incessant Talker’s strategy is to have no interest in nor feelings for their listener. This is quite important: becoming interested in you or in what you have to say could jeopardise their entire approach to communicating – they could lose their train of thought and their mesmeric power.

(5) Yet another key Incessant Talkers skill is to be able to ignore feedback from their audience - whether this be one person or many. Whilst talking most people use verbal and non-verbal feedback to gauge whether or not they are engaging the other person. Not the Incessant Talker – they are not distracted by such irrelevancies. All that matters is transmitting what’s on their mind.

(6) Perhaps the most critical Incessant Talker strategy is the ability to zone in on ‘nice people’ i.e. the ones who are too polite to hurt the Talker’s feelings by walking away. In NLP we call such people ‘Compulsive Rapporters” because they cannot not get into rapport with people - they want to like and be liked by everyone.! They are perfect Incessant Talker victims because they could never decide ‘this person is just boring – I’m off!’  (Compulsive Rapporters? See note below)

Why they do it?

In NLP we like to figure out not just what people do but why they do it. With Incessant one thing is pretty certain; they are not motivated by encouragement. Far from encouraging them, their listeners/victims try to avoid them.

So why do they continue with their unsociable behaviour? What role does it play in their lives? My own observations suggest a range of likely drivers:

How do Incessant Talkers affect us?

If we model how we are affected by the Incessant Talker a most important effect stands out. Quite simply, they scramble our thinking.

In NLP we recognise that most of us think using one or more of four senses or representational systems. We think through mental pictures, or self talk and analysis, and or feelings – and some think in sounds. We all use all four methods and most of us specialise or prefer one of them.

Being talked at affects this mental activity. Unless we are careful it can actually block our ability to think clearly and have our own thoughts about what the speaker is saying. Our thinking is scrambled. It’s as if mind becomes confused or even numb. This often leads to panic or frustration or anger. But usually we’re too polite to express these feelings so we silently simmer.

The proficient Incessant Talker will actually put us into a form of hypnotic trance. Without being aware of it they are using traditional hypnotic techniques such as overloading the mind, inhibiting critical thinking, confusing the listener and using monotonous and fast or slow-paced delivery. And this hypnotic trance issue raises two warnings:

Ignore rapport:  If you happen to be a compulsive rapport-maker (see below) be aware that you are the type of person the Incessant Talker seeks out. You don’t like to upset or offend so you’re the one that gets picked on at the party, at work, on a training course, on the bus or train…

Look after yourself: The advice is simple: look after yourself! You do not have a duty be a patient victim of the Incessant Talker. Temporarily set aside traditional communication skills such as being a good listener or seeking to understand them. None of these work with the Incessant Talker -- they are playing a different game, whether they realise this or not. Your job is to take care of yourself and get away.

You're not the only one: Remember they’ve been doing this all their lives; picking off unskilled zebras. So, in learning to find and 'en-trance' willing listeners they’ve likely developed a pretty thick skin.

Ignore the 'guilt' game: Okay, many of them will play the guilt card and look or act hurt if you refuse to hang around. But your task is to remind yourself that you’re just one zebra in the herd. And escape. If you can steel yourself to do this a few times they’ll give up and look for easier prey.

Can I change them with NLP?

Some people may ask, ‘I’ve learned NLP – can’t I change them?’ The answer is no - not unless they want to change.

And changing others surreptitiously is not what NLP is about: it’s about changing ourselves - and assisting others to change themselves, if they ask for our assistance.

PS: What is a Compulsive Rapporter?  Some of us have a compulsion to be nice to everyone. We want to be friends with everyone. We especially don't like to upset or annoy or disappoint anyone. Why? There are probably dozens of reasons but a common one is that we tend to empathise with anyone and everyone – and, especially, feel what we believe they are feeling or might feel.

We Compulsive Rapporters couldn't possibly upset the Incessant Talker by ending the conversation and walking away...

Enjoy a long summer weekend in the New Forest