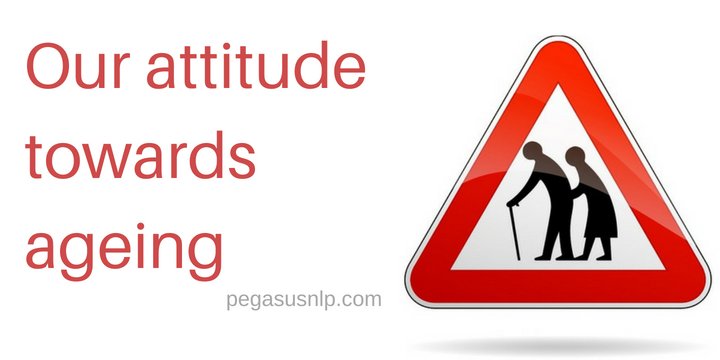 NLP and the ageing attitude

How our attitude affects our age

She was a granny in her early sixties. Not young, perhaps, yet there was something about her that caused people to not notice her chronological age…

Jacqueline was a tough and very professional business-woman with onerous and on-going responsibilities. Yet everyone, even the lowest in the hierarchy, received the same full unhurried attention.

In a very natural manner, she had poise, pizzazz, and humour. When she encountered someone she appeared genuinely delighted to meet them. And people felt special because of this attention. Especially when she smiled, which she did a lot, because Jacqueline's smile was magical. It transformed her appearance and, unlike the practised stretching of the mouth muscles that so often passes for a smile, her smile emanated from deep down inside, took a while to reach full power, and then lingered magically bathing everyone in its warmth.

She looked after herself

Jacqueline supplemented her wonderful personality with an easy elegance and natural beauty. She looked after herself. She dressed well and favoured flamboyant hair styles, used little or no make-up and had not resorted to 'cosmetic' surgery.

She was slim, fit and had loads of poise. But her secret 'beauty aid' weapon probably was unnoticeable to most people. She acted as if she'd forgotten how 'old' she was. And, curiously, this affected the men and women with whom she came into contact! I noticed men of all ages flirting with her– and she mischievously and joyously responded.

Incidentally, Jacqueline is not her real name and our paths crossed only very briefly in the late 1990's.

I was fascinated by her style and, in true NLP-fashion, by how she operated! Later I realised I had come across a living example of the kind of person Dr. Dave Dobson had told us about in one of his London seminars.

(Dave Dobson was a fascinating character. He taught his seminars mainly through telling us stories – which remain fresh in my mind over 35 years after his seminars. He, too, had that mischievousness about him. And you were never sure whether it was truth or a made-up story. Not that it made a lot of difference – the lesson was always valuable. He died in 2008 but his website is still online at https://www.otcc.com.)

According to Dave there was a girl in his class at school who was exceedingly plain (which, he reminded us Europeans, is American for “un-beautiful”). The snag was that she didn't appear to realise that she was plain. She thought she was beautiful. And she acted as if she was the most beautiful girl in the school with the result that people responded to her as if she were, indeed, beautiful. She had more attention from the boys than any other girl in the class, according to Dave…

It's interesting how we programme ourselves. We decide our outward appearance fits or misfits a social norm and then proceed to use our imagination to live up to our own belief or decision about how acceptable or unacceptable we therefore are. And other people then respond to us accordingly.

So let's say that at some stage (this often occurs in teenage years) Joe decides that he is too ugly, skinny, fat, tall, small, broad, narrow, dark, light, or whatever. This might be based on how he compares himself with air-brushed images in the printed media. Or it might be the result of a few comments from other people. Or he may have decided that his appearance is the reason for his being unpopular (and that this unpopularity had nothing to do with his being an uninteresting, self-absorbed, and withdrawn youngster).

He then unintentionally sets about programming himself to live up to this image or decision or belief about how he looks. Each time he catches sight of himself in the mirror he silently criticises how he looks. Or he winces at his appearance. If he sees someone attractive he'll say “They wouldn't be interested in me – they're too attractive for that!” And each time he does get rejected – in love, in friendship, or in his career it's further proof of his flawed appearance.

So his relentless self-programming continues and he develops a personality to match what he thinks he looks like. And gradually people begin responding to this personality that he portrays. He's caught in a self-built vicious circle.

Happily there are many exceptions to this trend. Most of us come to accept ourselves as we are – and even learn to thrive on being uniquely ourselves. And then along comes age! Just a few short years after getting over the teenage angst about our appearance the wrinkles begin appearing or the grey hairs or the lack of hairs! And the process begins all over again – unless we are careful…

We create our reality

Unless we take a leaf out of the book of people like Jacqueline and Dave Dobson's schoolmate and create our own reality – since it does appear to have an influence on the realities, and the perceptions and responses, of others.

Could it be that the reason people look old on the outside is because they have grown old on the inside? Maybe ageing begins with our attitude towards ourselves and towards life.

There's a saying “Act your age!” which is used in many societies to keep people from being different. It's backed up with other sayings and other subtle social mores about how people at certain stages and of certain ages 'should' behave.

Happily these social control mechanisms have less and less influence thanks to the variety of role models now available for just about anyone with just about any lifestyle. Yet they can still have a quite subtle influence at a subliminal, unconscious level unless we are alert.

For a start you might begin differentiating the different types of age. Why stick to boring old chronological age. Try out a few other age-standards….

What is your Chronological Age – i.e. the number of years since your birth? Now compare yourself with others in terms of a few other ‘ages'…

(1) Take your Physical Age – how fit and supple are you compared with the norm for your (chronological) age?

(2) How about your ‘Health Age' How does physical health compare with the norm for your age?

(4) How's your ‘Vitality Age' – have you more or less vitality than others of your age. We've all met 21 year olds who had the vitality of a 60-year olds – and vice versa!

As I watched Jacqueline-the-granny being the no-nonsense business-woman, the charming host or the playful flirt I just couldn't imagine her slapping on layers of anti-wrinkle creams, or thumbing through cosmetic surgery catalogues, or looking at herself in the mirror and worrying about her chronological age. She seemed much too involved with enjoying and getting the most from each moment...

Age is mainly about attitude. Assuming you look after your physical health, age is very much connected with what you believe about yourself and the degree to which you allow the beliefs that other people have about age to influence you…