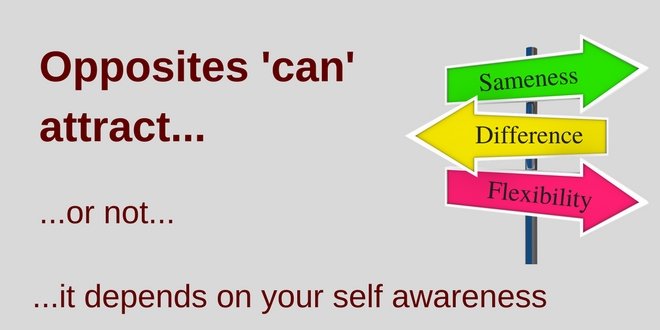 The NLP Meta Programme of ‘Sameness’

Some of us prefer 'sameness' patterns - we like to do the same thing over and over again.

For example, do you tend to

If you answered yes to more than a couple of these you probably have a preference for Sameness. You like things to remain the same. You avoid too much newness or change in your life.

Sometimes this is a choice - and sometimes it 'sort of happens'. It creeps up on you - this preference for sameness happens gradually, over time.

The Sameness pattern is part of the NLP Meta Programme of Sameness & Difference.

Meta Programmes are pairs of opposing preferences or continuums; in this case between the two extremes of:

Sameness: someone who wants continuity, stability, and predictability – someone who likes to keep things the same.

Difference: someone who wants variety, adventure, and the unknown – someone who likes to change things.

Let's take Seb's and Dana's relationship.  They get along great - most of the time. Even though they are at opposite poles on the Sameness & Difference continuum.

Because of this 'Seb Sameness' tends to be wary of or even uncomfortable with the 'Dana Difference' way of doing things. To him Dana can, at times, be scary, unreliable, and unsettling. She is all too ready to ‘rock the boat’ just of the sake of it; not to be trusted with tasks that require a systematic approach.

Dana, on the other hand, sees Seb Sameness as a little boring, a wee bit set in his ways, or even unadventurous – sometimes even a bit of a stick-in-the-mud.

But, as I said, they get along great... most of time time.

We tend to be flexible until...

We all have something of each preferences.  And we generally be flexible with our preferences, which can change from situation to situation. We may, for example, like lots Sameness and routine at work but prefer lots of Difference and variety in our social lives.

Similarly, we will tend to get along fine with people who stick to the opposite end of the continuum as we do.

... however this flexibility can disappear quickly because of stress and gradually as we age.

Sameness and Difference in relationships

People usually end up with life partners who are very different to themselves. This is great when things are going well. And great at the beginning of the relationship.  You can thrive on having quite different sameness-differences preferences. And it can be actually be stimulating and even a cause for humour or banter.

Now the differences become irritating and frustrating - instead of humorous. The banter changes to attempts to get the other person to see things your way!

So if things at work, or in their relationship, become stressful Seb Sameness and Dana Difference will react in quite different ways.

Seb will carefully stick to routine and procedure and be insistent on doing things his way - in a systematic and almost pedantic manner.

Dana, on the other hand will become even more unpredictable, adventurous and experimental – which, of course, will be very unsettling for Seb, unless he sees it as simply Dana’s way of dealing with stress.

When Sameness is useful

Seb’s preference for continuity and predictability makes him efficient. He gets things done smoothly and reliably. He doesn’t mind the daily routine, up to a point, and as long as this is not taken for granted by Dana.

Sameness is also a great pattern to temporarily move into if your life involves lots of change. You can deliberately create a Sameness Comfort Zone to retreat to and recharge your batteries.

For example, I did a lot of travelling over about 15 years presenting training programmes in the UK, Ireland and Europe: a lifestyle that brought a lot of Differences. I recognised the need for some Sameness within this - so, where possible, I would return to the same hotel in a town and eat in the same restaurant. Even, when visiting a city for the first time, I would often ask to be booked into a hotel from a chain I was familiar with.

Not getting stuck in Sameness

For most of us life can be a journey from Sameness to... Sameness.

Very young children need routine and many elderly gradually become sticklers for routine. In addition, many people tend to develop a strong preference for the Comfort Zone of Sameness once into our twenties or thirties.

As with all of the NLP Meta Programmes, we need to have both ‘sides’ of the Sameness-Difference pattern operating together and in balance.

You don’t need to turn your life upside down to redress the imbalance of too much Sameness. Lots of small changes can be just as good and are easier to begin with:

Remember, it’s not the size of the change that matters – just that it is a change. In fact, suddenly introducing lots of differences into your life can be counter-productive and provoke a ‘never again’ retreat into the security of Sameness.

The 10% New Approach is a great way of introducing small and frequent changes and there is an article about it on our website.

The article has been updated.  This original version article was written on 12 August 2013. It was triggered by a recognition on that day that, after 8 years in the same house and village, our lives were becoming a bit too samey.

Not just because of that number of years - more to do with living for that length of time in a tiny rural village - 50 minutes drive (plus a ferry crossing) from the nearest sizeable towns!

It wasn't 'officially' a retirement village; it had become so because of the number of down-sizers who had moved in, putting up house prices so that most younger local people could no longer afford to live there.