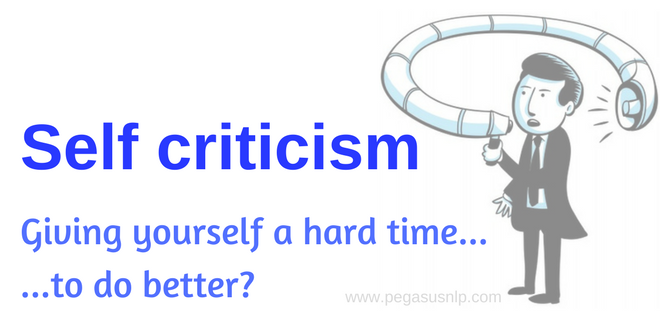 Do you give yourself a hard time…?

What you do when you slip up?

When you make a mistake, forget something, screw up, open your mouth and (metaphorically) put your foot in it, do something embarrassing, etc.

Well, if you’re like most of us you probably do give yourself a hard time about it.

You pile on the guilt.

Relive the awkward or embarrassing or failure moment over and over again.

All of this accompanied by the self talk: why can’t you ever get anything right! You stupid, stupid person! How can you be so foolish/silly/careless/short-sighted/… (plus anything else you’d like to add).

This self criticism isn’t a tried and tested method for improving our performance, by the way.

It’s simply an old, and quite outdated, habit that we pick up along the way. A habit that doesn’t even work.

How do we acquire the habit? When we’re very young we model the behaviour of people around us. People whose approach was, perhaps, more stick than carrot – more punishment-oriented than reward-oriented.

In NLP we call this an ‘away from’ motivational style – it focuses on moving away from pain or discomfort.

The more you beat yourself up about something the more you lower your emotional buoyancy. Your self-criticism undermines both your confidence and your self-esteem.

This means that the next time you approach a similar situation you are less emotionally buoyant, you have less confidence in how you handle it, and you have a lowered opinion of yourself.

Which means that next time you’re likely to perform even less effectively!

“But we need criticism, don’t we?”

But, according to some people, a good telling off never did anyone any harm – and if we’re not reminded of our failures we’ll repeat them.

There is some truth in this. Having our failures pointed out to us can be useful – and is especially useful if this is accompanied by coaching in how to do things better next time.

But endless self-criticism is quite different: that undermining inner voice operates just like a hypnotist. In traditional hypnosis, unlike Ericksonian hypnosis, the hypnotist’s the first job is to inhibit the person’s Critical Factor i.e. their ability to think rationally and critically. They do this so that the person’s unconscious mind will unquestioningly accepts the hypnotist’s suggestions.

On-going self criticism operates subliminally and quietly. It runs continually in the background. we become so used to it that what we are saying to ourselves is rarely challenged by the Critical Factor. So we accept our own negative suggestions unquestioningly! Which is, or should be, quite scary thought…

As the golfer Chip Beck suggested “pain and suffering are inevitable in our lives — but misery is an option”.