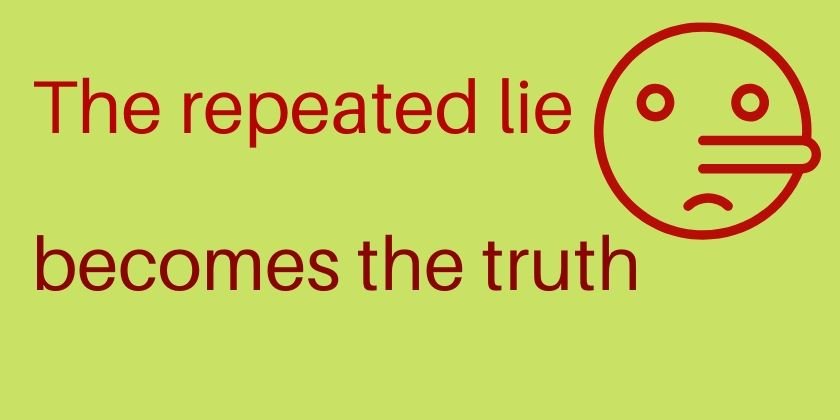 The repeated lie is believed

The 3rd Monday in January is the most depressing day of the year... according to many British newspapers.

This ‘scientific claim’ is the invention of a PR company and a part-time lecturer. It was created back in 2004 to get people to book their annual summer holidays earlier and is, of course, rubbish.

It has been thoroughly discredited over the past 15 years (lots of links in my 2011 article here https://nlp-now.co.uk/the-blue-monday-myth-or-lie/).

Rubbish or not, the myth is dusted off and rolled out each year by the UK media – so we can still expect lots of articles each January from our British newspapers.

Unlike a few years ago, fewer articles now claim Blue Monday has been ‘scientifically proven’.  Most will lead with “It’s the Most Depressing Day” but throw in a comment along the lines “well, actually, it’s not really the most depressing day BUT…!”

Psychologists have given the ‘repeated lie is believed’ phenomenon a proper official title - which sounds much more important than my 'repeated lie effect'.  They call it ‘the illusory truth effect’ and shows that people believe a fact if it is repeated often enough.

Back in the 1930s Joseph Goebbels, as Minister of Propaganda of Nazi Germany, used the Repeated Lie Effect to demonise the Jewish race.

Currently President Trump’s use of the Repeated Lie Effect has become legendary.  And more than a few of our current English politicians seem to have picked up tips from Goebbels and Trump.

But we’re all susceptible to the Repeated Lie Effect. Because we gullibly repeat what we see and hear rather than question it – examples include: The honey bee is too heavy to fly. Vitamin C cures or prevents the common cold. (There are 10 myths here: https://science.howstuffworks.com/science-vs-myth/everyday-myths/10-false-facts1.htm)

By the way, you can read about the Repeated Lie Effect in this British Psychological Society article: https://bit.ly/37chpgo

The antidote to the Repeated Lie Effect?

“I keep six honest serving men
(They taught me all I knew);
Their names are What and Why and When
And How and Where and Who.”