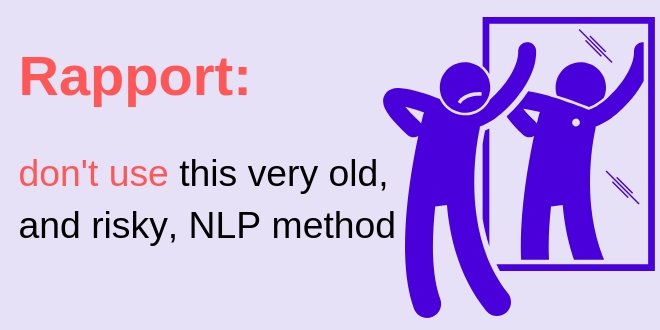 How not to create rapport: mirroring

One traditional, and risky, way of using NLP to create rapport is by matching a person's body language. In NLP we call this process matching or 'mirroring'

So if I use mirroring to get into rapport with you I could match your behaviour in one or more ways. I could, for example, match your posture, or your gestures, or how you move your body.

And, of the many way of creating rapport, this is the least advisable! Why? Because it is so obvious that it intrudes into the other person's awareness and is then usually misinterpreted as an attempt at manipulation

Rapport was one of the activities which the early NLP explorers first modelled back in the 1970's.  They noticed that when people are getting along well together, when they are in rapport, they tend to match each other's body posture,  movements, and even voice tonalities.

Anyone who has done a bit of people-watching in cafes, restaurants or airports will have seen this in action.

So they took the end product of rapport (that people who are in rapport with one another tend to match body language) and 'reverse-engineered' this to come up with the ‘NLP body-matching technique’ for subliminally creating rapport.

This was not so useful.

The "dance" or body language matching is occurring as a result of their being in rapport. It also occurs naturally and, because it is occurring naturally, it does not intrude into either person's awareness and does, in a way, subliminally contribute to the on-going rapport..

From rapport to farce

But to take this result of rapport and use it to deliberately create rapport is, at best, unreliable.

At worst it can backfire and have the opposite effect to what you want.

And it can become farcical… the person with whom you wish to create rapport shifts in their seat and, as an enthusiastic NLP newbie, you do so too. They nod - so do you. They smile, scratch their head, lean forwards, lean backwards, etc and you do the same!

One problem with this is that nowadays, more than 4 decades after NLP began, people are a lot more alert to such clumsy techniques. Many will have come across them on the internet, or on training courses, and in the many books which feature them.

So in using this approach you risk making the other person aware of what you are doing and, rather than perceiving this as a well-intentioned attempt to get along better with them,  will misinterpret your behaviour as a clumsy and insulting attempt to manipulate them.

But I’ve seen it work!

Surprisingly, this method is still being taught in many NLP courses.

Fortunately, in some courses and in some books, you are advised to use the approach carefully - (1) only do a bare minimum of body language matching and (2) allow a 10-30 second delay between the other person's movement and your matching movement or postural shift.

These recommendations are designed to ensure that your technique doesn't intrude into the other person’s conscious awareness and, yes, this somewhat mechanical behaviour can contribute to rapport with some unsuspecting people, especially if you hone your skills very carefully

But…  it's still very risky.

And why bother? When there are so many straightforward and risk-free and respectful methods?