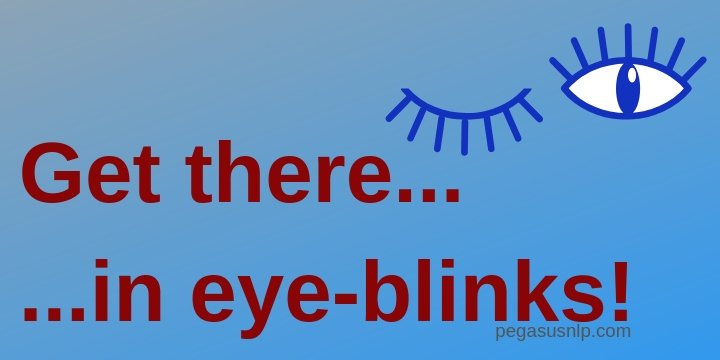 Achieve your goals in tiny steps

Yes, you can often achieve seemingly impossible goals with a big, determined, and energetic push.

But sometimes a more strategic approach works better so that you achieve your goal in a determined and systematic manner.

It worked for John Naber.

At the 1972 Munich Olympics the 16 year old John Naber was a training partner to US swimmer Mark Spitz. Spitz achieved 7 gold medals in the games which was a record that stood for 16 years until Michael Phelps reached 8 golds in the Beijing games.

Naber was also in the relay team but was dropped from the relay finals in favour of more well-known names.

Inspired rather than disappointed he decided he would be back at the Olympics as a swimmer in his own right rather than as a disposable ‘domestique’ – and that he would win a gold in his favourite event which was the 100 metre backstroke.

Four years later at the 1976 Montreal games he achieved his goal – and his gold.

And the strategy he used is inspirational.

First he carefully studied the times attained by 100 metre backstroke winners at the Olympics. For this he estimated that winning time at Montreal in four years’ time would be 55.5 seconds.

At the time his own 100 metres backstroke best was 59.5 seconds. He’d have to shave 4 seconds off this time to achieve gold at Montreal.  Which sounds like a piece of cake…

But in Olympic standard swimming to improve by 4 seconds over 100 metres was a daunting prospect.  So much so that he initially gave it up as an impossible dream.

And then he thought about it again and did some more calculations:

Naber had taken a goal that had initially overwhelmed him and made it achievable by breaking it down into bite sized chunks.

Before he did this he was faced with the seemingly impossible task of beating the speed of previous Olympic Gold winners – and knocking a whole 4 seconds off his own best speed for the 100 metres.

After he'd planned his strategy he no longer was daunted by this.

He could see he only needed to improve his performance by the speed of an eye blink every four hours of training!  And he needed to continue to do this week in week out for four years. He got to work on it, stuck to his plan and achieved two objectives:

Interestingly his winning time was 55.49 seconds.

This was .01 seconds faster than he had aimed for.  And it was just .85 seconds, or one eye blink, faster than his teammate Peter Rocca who won the silver medal.

This is a strategy which we can use in any area of life. You take the Big Daunting Task and chop it up into Tiny Steps. Then you only need to move from one step to the next – and keep doing so.

Unless we're careful Big Daunting Tasks can beat us before we begin. But Tiny Steps are easy – just like Naber’s blink of an eye improvement each hour.

Planning your study regime for an examination

Get the complete picture of what you have to cover for the exam. Break this vast project into tiny chunks of learning.

Estimate the available study hours between now and the morning of the examination.  Remember to include revision time. Allocate a learning chunk to each study hour.  Write this down and track your progress.

What is your goal?  When do you want to have achieved this? What is the performance difference between now and your goal?  Give this difference a numerical value.

How much practice time will you invest in achieving your goal?  Now divvy out the practice time so that you improve consistently with each part of each practice session.  Keep records!

What is your goal?  Is it body size or body weight? Give your goal a numerical value e.g. ounces/grams or inches/centimetres. What is your daily investment in this goal in terms of eating patterns and activity patterns?

Catching up on the backlog at work

Giving the garden a makeover

Coaching your work team in how to reach goals or targets.

The key pieces in the strategy

1. Break down the whole project into tiny chunks of activity

2. Identifying the time available to achieve the goal – aim for hours rather than months or years

3. Allocate time to each activity chunk

4. Aim for improvements in each session - it’s about results achieved rather than time spent

5. Keep records! Write everything down – or, better still, use a simple spreadsheet.  This way you can compare your invested effort with your small improvements or achievements session by session.

What you need to add to this list are motivation and belief in your own ability.

Naber was already a school champion when he swam with Mark Spitz so it’s likely he had oodles of motivation and belief.

You have to find your own way of supplying these – and there are lots of links on our goals and motivation section to help you.  https://nlp-now.co.uk/nlp-goals-objectives/