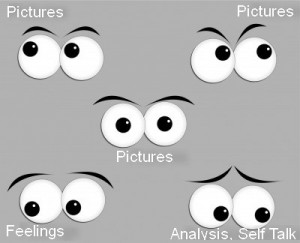 It used to be that some people we regarded as gifted communicators and everyone else had to work hard at developing their skills. Then, about 45 years ago, along came NLP which began identifying the skills that the apparently ‘gifted’ communicators used.

One of many obvious-once-it’s-pointed-out discoveries the NLP came up with was the famous, and sometimes infamous, NLP Eye Assessing Cues method.

What are the Accessing Cues?

Why ‘an educated guess’?

The NLP Eye Accessing cues are sometimes presented as facts or truths, something the original developers of NLP cautioned against. It is wise to treat the standard eye directions as simply the beginning of your observation of how and individual thinks and then to use the 6 requirements below to identify the directions favoured by the person with whom you are communicating.

Yes, very. Knowing whether a person is thinking mainly in pictures, in self talk, in feelings or in sounds enables us to know

Yes, providing you follow 6 requirements which need to be in place for the NLP Eye Accessing Cues method to work as it was intended.

(Incidentally, most scientific research into the Eye Movements has ‘proven’ they don’t work but, as no project has incorporated the 6 requirements, this result is inevitable. See https://nlp-now.co.uk/eyes-dont-have-it-nlp-disproved-or-not).

How to develop skill with the Eye Movements

The best way of learning to use the method is to attend a thorough NLP training such as our NLP training courses in the New Forest since you will get lots of hands-on coaching in identifying the movements and how they differ from person to person. If this is not possible read some of the articles on our websites and then begin practising.

KISS: keep is short and simple. Go for just 3 types of thinking to begin with

You can refine things later. Spend a few weeks watching for these three and you’ll soon be noticing the eye movements automatically. Aim to first get used to noticing the very obvious movements: then the more subtle and almost invisible eye flickers. Then begin observing in conversation so you can get feedback from the person on what their movements indicate.

This is a shortened version of the full article in our NLP Newsletter.