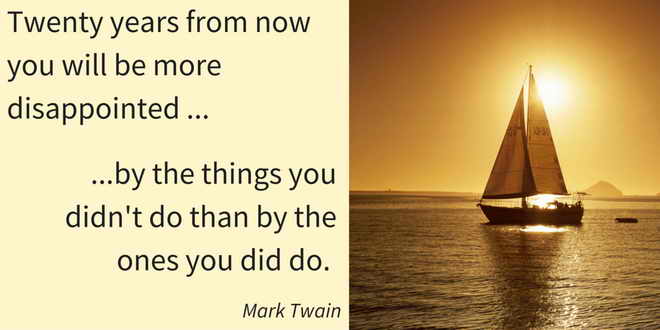 How to avoid regret

'If I Had My Life to Live Over'

Over 30 years ago I came across a poem called ‘If I Had My Life to Live Over’ written, apparently, by an 85-year-old woman called Nadine Stair.

In it she talks of all the things she would do if she had a second chance. The poem ends:

I would go barefoot earlier in the spring and stay that way later in the fall.
I would go to more dances.
I would ride more merry-go-rounds.
I would pick more daisies.

A poem to make you think

Now just like the people who first showed me this poem, I found it wonderful and inspirational.  That is, until Tony, a less idealistic and more down-to-earth friend, pointed out that it's actually quite tragic!

This initially shocked me.

And then I thought about it...

Here is this woman who, after spending 85 years on this earth, is looking back at all the things she could have done and did not do!

So, yes, it's a poem to make you think - but not quite as it is usually interpreted.

Because it's a poem of regret.

(Incidentally, it seems unlikely that the poem was written by this 85-year-old woman. Most likely it is based on an article by author and humourist Don Herold which was published in Reader's Digest October 1953 when he was not 85 but a mere stripling of 64.  But that's another story...)

"If only" and regret

By way of background...

For about two decades I ran stress management courses for around 15-20 people at a time - sometimes 4 or 5 each week.  And I had an individual counselling and coaching private practice  - in which I got to meet and work with a few thousand people exploring their challenging situations.

Now one of these 'challenging situations', encountered all too often, was when an elderly people would sigh and say 'if only I had done this - if only I had seized this opportunity - if only I had acted instead of hesitated! But...  it's too late now…'

Sometimes we were able to devise ways of enabling them to realise their dream – or, at least, a modified version of it.

And often it was, indeed, just too late.

And their ‘if only’ stories and regrets impressed on me the importance of not acting as if we have unlimited time.

Their recognition of missed opportunities, their sadness, and their sense of regret motivated me to ensure that I didn't go the same way. They provided me with what, in NLP, we call an away-from motivation to not do as they did.

Let's do this…. one day… perhaps

Many of us, when we are young or even into middle age, act as if we have all the time in the world.

So we squander this time – thinking we'll ‘get around to’ having a great life one day - at some undetermined point in the future.  And many people never do get around to it - because their future is always in the future.

Because what we do today is creating our future

Connecting with your future

In using NLP to model people who live successful lives, I have noticed one trait again and again: they have are very clear about the present-to-future relationship.

They have a very clear appreciation of the connection - the cause-effect relationship - between the present and the future.

They see that what they are doing right now is creating their future.

They aren't waiting till next week or next month or a few year's time to begin having a great future. They know that it's what they are doing, rather than what they are going to do, that is creating their future.

Compare this with how the majority of people think about their dreams for a great future. Rather than go for it and just do it they talk themselves out of taking action…

No, really, I am going to begin living my dream… one day soon…

…when the time is right…

…when I have a little more spare time…

… when the children have started school

… when the children have finished school

….when the work pressure has eased

… when we've decorated the new house

… when we’ve built the new conservatory

…when we have more money

…when my health improves…

It's so easy to talk oneself out of things, isn't it.

It's so easy to rationalise staying in our Comfort Zone.

It's so easy to switch off our minds to life's little opportunities and, instead, to opt for the safer choice of watching the telly or reading a book.  (See the newsletter articles on Procrastination).

There are always good reasons for not acting right now.

We may call this

being in information-gathering mode or

And sometimes these alibis are realistic and true.  Yet often we are simply deluding ourselves.

Many people are living their lives in order to have things. They want to have things because they believe that having these things will give them the feelings they want.  Which, of course, is what the marketing and advertising people want them to believe.

But there is a short cut, and one that might not necessarily involve as much expense...

In other words, think about which values you want to be fulfilling. And use these feelings or values as your guide for building your dream or vision for your future.

(And check out our section on creating realistic goals here)

A word from Frasier

The final episode of that great TV comedy series ‘Frasier’ was broadcast in the UK  in September 2004.  At the end of the programme Frasier, as the psychiatrist radio presenter, tells his listeners 'what we regret most are the chances we never took'.