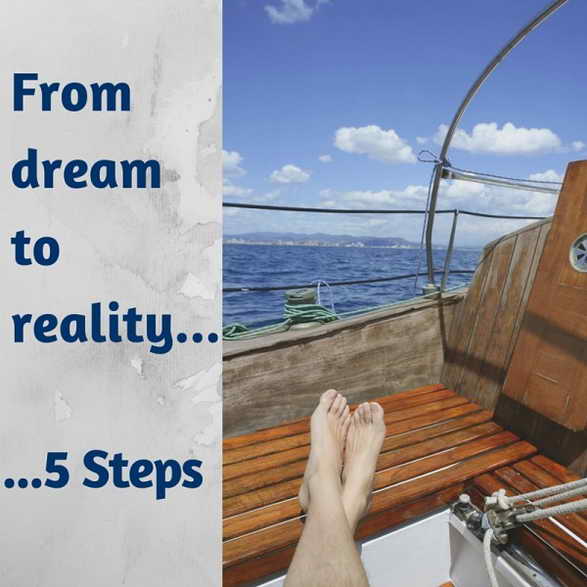 In my experience in using NLP over the past few decades, one of the areas in which I've found NLP to be especially valuable is examining the connection between:

Our Action Plans (or lack of them) ...and

Our Action Steps - Actually doing something to turn the Dream into Reality.

Let's look at how this works...

Paul talked a good talk, too, and was very believable.  He’d been talking about becoming fitter for some years now.  Only thing was, instead of becoming fitter, he was visibly becoming less fit.

A lot of people talk a good talk.  They have wonderful, inspiring dreams: one day they’ll be healthier, fitter, happier, have more friends, be more successful. And they keep dreaming about what they want.

Problem is it’s just a dream… They are talking the talk but not walking their talk. It's just wishful thinking.

Have a goal to make the dream a reality

To move beyond this wishful thinking we need to do something to the dream - we need to give it a reality check. We need to 'qualify it' i.e. put it to a reality test. We need to find out if it's possible to achieve it - or if we'll just keep it as a nice fluffy feel-good day-dream.

One day Paul decided enough was enough: he decided he was actually going to make his dream a reality.  He’d been researching personal development methods and discovered that a dream needs to be transformed into a goal otherwise, as he’d come to realise, it will always remain out of reach.

So he learned to design or ‘qualify’ dreams so they became more realistic and more achievable. There are lots of techniques for turning dreams into goals.  One is the well-known SMART goals model.  Another is our own Pegasus NLP PECSAW model.

(1) Decide what you do want

If your goal needs other people to change or to act in some way then it’s just a dream, because you are not in control of the result.

You must know why you want it.  The more of these ‘Whys’ you have the more likely you are to remain motivated and to achieve your goal.  (There are three other steps, too, in the PECSAW model).

Paul has written down the above three steps:

(1) He knows he wants to be healthier.

(2) He knows it’s entirely within his power to make this happen.

(3) And he has listed 14 reasons why achieving this goal is important to him.

He has taken the first 3 critically important steps in making his dream a reality.

This is Tip #4 and a lot of people don't get this far. They write down their dream and carefully qualify it so that it’s turned into a goal. But that’s as far as they go.

Their goal looks and feels realistic and achievable. So now they relax and wait for things to happen. But nothing is going to happen because they don't have a 'to do' list to guide them in taking action!  They have simply ended up with a more precise version of their dream!

The Action Steps, just like any 'to do' list need to detail what to do first, next, next, and so on.

And they work better if they are written, too, so that you can cross each step off as you achieve it.

Paul was now fired up. Writing out his 'Whys’, his reasons for wanting to become fitter, made achieving his goal ‘non-negotiable’!  He really got into it and came up with 14 reasons to get fitter. He then decided was going to settle for nothing less than success.

He set himself a six-month goal.  In this goal he designed precisely what ‘fitter’ meant to him - and wrote down:

- What he would weigh

- How he would appear in the mirror.

Then he worked backwards from the six months date to today and identified the action steps he needed to take.

He detailed these steps in terms of general daily activity, fitness activity, dietary change, and how he would maintain motivation whenever the going got tough.

Interestingly, a lot of people take things no further than this stage.

Why? Well, the first 4 stages are comfortable. They are intellectual rather than physical.  They involve mentally doing things’ on paper or on screen.  But this is not taking action – it is preparation for action.

Planning is essential - but it must be followed by doing things - by taking action.  But it is easy to delude ourselves that preparation is all we need to do.

Paul realised he he must act. Timed action steps are central to his plan. He has detailed when, precisely, he will do things.  For example he knows that tomorrow morning he will get up 35 minutes earlier in order to do some exercise.  And that at lunchtime he will leave the office and go for a walk around the block before eating his lunch-time sandwich.

He has also factored in a ‘non-obsessive’ clause - he can change his plans for a particular day should circumstances require this but will later catch up on what he has missed. Because he has decided that in any seven-day span he will still achieve his weekly goal.

One reason why some people don’t move from planning to doing is that they are put off by their goals appearing too daunting. After the initial excitement of designing the goal many of people give up: ‘It’s too big, I’d never be able to achieve that. It’ll take forever!’

This is where the little-and-often rule applies.

We need to break down the goal into tiny little steps which engage us every day or so.  (That's what Paul did - see above). In this way we are not focusing on achieving the Great Goal: we are simply aiming for the Next Step.

There is yet another obstacle which can trip us up unless we’re careful.  Our action steps require us to do something out of the ordinary. They are new and unfamiliar and will interrupt our daily routine.  But routines are cosy and very seductive; they enable us to go about on auto-pilot, without having to think too much.

So we need to ensure our action steps become part of our routine as quickly and as smoothly as possible. Otherwise the cosiness of being on auto-pilot will tempt us back to the old ways.

And this obstacle is overcome by taking very small action steps, frequently.  (Yes, those small written steps, yet again!).  Because if we do something frequently and every day or two it quickly becomes part of our routine.

Paul has a busy work life and has a family.  So he decided to do his exercise first thing in the morning and sometimes during his lunch break.  The great thing about early morning action steps is that they very quickly become part of our routine.  If we get up and do them, almost before we have had time to think about them, they are much more likely to get done and become part of our routine.

Plus we then have that feeling of achievement for the rest of the day.  And Paul was also careful to make the action steps for the first couple of months less demanding to enable him to smoothly get into a routine which h did upset his home life.

Because he manages a team of people Paul also knows a bit about motivation.  He knows that the 'little and often' approach to motivation works better than the occasional big motivation sessions.

To ensure he remains motivated Paul has his list of 14 reasons, his 'whys'.  His list includes lots of detail of what he is achieving as he moves towards his goal. And, importantly, what he he's avoiding by moving towards it.

And, also importantly, Paul made a point of thoughtfully reading through this list a couple of times a week.

And, as he did this, he discovered that it alerted him to even more reasons, even more 'whys'.  So his motivation became self-generating.

It’s a straightforward process. The 5 steps or stages are about dreaming a great dream, turning it into a realistic goal, then making a plan for it, then taking action - and staying on track.

It’s about ensuring that you are doing rather than merely thinking about doing.