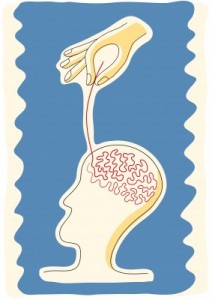 It goes like this; you’ve been interested in and using NLP for a while and have found that it has made a difference in your life. You’ve used it to solve some problems and to make a few valuable breakthroughs in how you think, feel and communicate. And you want to let others know about it – family, friends and work colleagues.

So you enthusiastically tell them about this wonderfully effective and powerful body of knowledge and how easily you can use to change your life and how it’s simple to use and it’s very practical… so on and on and on!

And each time, within a minute or two, you begin to get sceptical looks – because you’re starting to sound like a starry-eyed convert to some cult or religion.

Then you begin to explain…

However a few people are prepared to hear you out so they ask ‘Okay, so what exactly is NLP – what does it mean?”

And that does it.

They hear ‘Programming’ and they’re off! “I don’t want to be programmed! I’d heard somewhere it was about mind control and hypnosis – and you’ve just confirmed my worst fears! Thanks, but no thanks!”

It’s the word ‘programming’ which, quite understandably, puts a lot of people off NLP.  They hear the word and they think of the activity of being programmed – or of programming others!

So you then have to attempt to logically explain that “programming” is about our mind-body programmes – the learned or wired-in ‘recipes’ we have for doing what we do every day.  Even as you begin developing this straight-forward explanation you can see them backing off. They’re heard ‘programming’  the emotional part of the brain has now sounded warnings.

The word has triggered their mental defence programmes(!) and their emotions are being nudged towards flight or fight.

How do you deal with that name?

Since 1979 I’ve been involved in using NLP in my own life and in empowering others.  Yet it took years before I succeeded in devising some down-to-earth and common sense ways of explaining what exactly NLP is. And, interestingly, people are more prepared nowadays to at least listen to your explanation than, say, in the 1980’s.

I tell people that NLP means “Neuro-Linguistic Programming” and that the name was devised by NLP co-founders Richard Bandler and John Grinder as a way of succinctly getting across how comprehensive a body of knowledge and insight it was. They wanted to succinctly encapsulate the body of  knowledge and methods:

Neuro:  NLP looks at how our neurology operates: how our mind and body communicate with one another and influence one another

Linguistic: A key part of NLP is how we use both verbal and non-verbal language to communicate with ourselves and others — the insights which NLP provides in this area are significant and profound

Programming: Our ‘programmes’ are our mental ‘recipes’ for doing what we do.  The programmes let us know how to do things automatically such as brush our teeth, make a cup of coffee, prepare a meal, walk, get angry, do what we do at work, etc. If we didn’t have these programmes we’d have to learn how to make the cup of coffee all over again each time.

And what about hypnosis?

Some therapists who use NLP do use it alongside hypnosis or hypnotherapy. And NLP did begin in the early 1970’s as an attempt to form a new form of psychotherapy. Even today many NLP courses still include hypnosis – especially the ‘fast track’ NLP courses. Properly used by a trained hypnotherapist hypnosis can be useful in psychotherapy as long as it’s  the non-directive Ericksonian Hypnotherapy.

I originally trained as a hypnotherapist:  it was actually on a hypnotherapy course that I first heard of NLP.  And as soon as I recognised the power of NLP and the way in which it can be used to empower people (rather that ‘treat’ them)  I gave it up, forever.

Things have changed in the past four decades since the embryonic therapy-led beginnings of NLP. Nowadays NLP is now widely used in just about all walks of life – including business, management, life coaching sports psychology, self-development, and selling. It’s no longer therapy-based.

The composite name does a comprehensive job and it covers the important functions which NLP addresses. It’s just a pity they choose programming rather than “programmes”. Neuro-Linguistic Programmes might have worked better.

But no, we’re stuck with Programming and have been for around 40 years!

Yes, the name comprehensive encapsulates what NLP covers.  But as a branding operation it wasn’t too clever: the name does NLP no favours. In fact, you could say that NLP has become successful world-wide despite rather than because of its name!