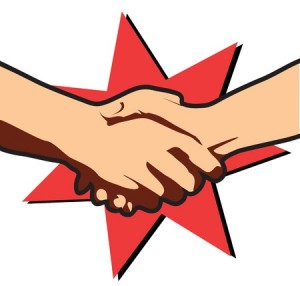 I usually come across no more than one or two of them a month. But in the last six days I have experienced no fewer than 4 different styles of decidedly unpleasant handshake: Knuckle Cruncher, the Dead Fish, the Submission Twist, and the Over-Sincere Friend.

The people I met were, I think, quite sincere and aiming to be friendly or sociable. Yet the impression they made was enduring and not particularly favourable.

So, with my NLP modelling hat on, I began wondering about how many different types of unpleasant handshakes there are. And what’s behind them each of these - since a key NLP Principle is that external behaviour out-pictures what's going on inside.

Right now I've come up with 9 less-than-delightful handshakes and the list is growing.  I’ll post a few articles on these later including the above four.

The feeling the other person gets from your handshake influences them instantly and emotionally.  How you shake hands non-verbally conveys a lot about you - and most of this is registered unconsciously.

The other person literally gets a feeling about you from those two or three seconds of physical contact. And this initial impact can last forever.  You can ‘say’ all the right things but if the ‘feeling’ they have registered from your handshake is unfavourable this can undermine what you say.

This is why it’s a good idea to make a good job of this initial physical contact.

So what’s a good handshake?

When it comes to making a good impression there is a bit more to the handshake than simply smiling and having a firm grip - and this is especially the case in business where a lot of handshaking goes on.

(Incidentally, because customs vary all over the world, this article is about how it’s done in the UK and North America in business or other formal situations.)

Debretts, who are often perceived as setting the standard for British etiquette, offer some suggestions e.g.

They also suggest that in the UK you avoid other forms of touching such as the double-handed shake because, as they comment, "Britain is still a comparatively non-tactile society”.

Here in the in the UK, and generally in North America, make your handshake warm, firm and brief i.e. 2-3 pumps along with an interested and engaging eye contact for the duration of the handshake.  Such a handshake is open, non-manipulative, and conveys the simple message I’m interested in getting to know you.

In NLP we very cautiously recommend matching the other person’s behaviour to a slight degree as a means of beginning to create rapport* and the handshake is a good area to use this. Simply aim to match the strength of the other person’s grip.

(On the other hand if you encounter the Knuckle Cruncher it’s best to not match their grip strength otherwise it'll likely descend into a power struggle – instead aim to avoid broken bones by extricating your hand from their grip as quickly as possible!)

* Be careful when using body-language matching to create rapport. It is widely recommended – but it can seriously backfire. Read our article on rapport and body-language.

Article Name
What makes a 'good' handshake?
Description
Your handshake can support or undermine what you say. Why? Because the feeling the other person gets from your handshake influences them instantly and emotionally.
Author
Reg Connolly
Posted in NLP in Everyday Life