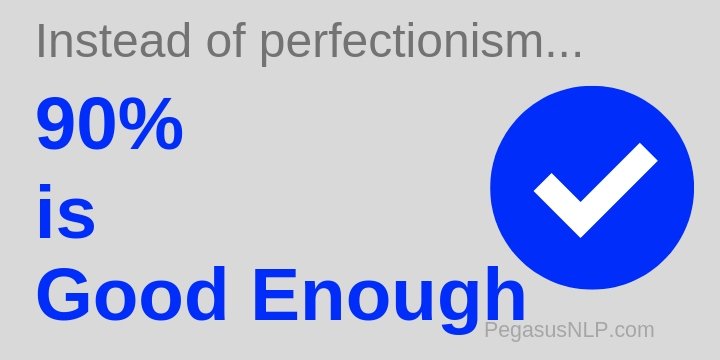 Perfectionism: a recipe for endless dissatisfaction

The perfectionist wants everything they do to be perfect.

They do not have an ‘it’s good enough – let’s move on’ standard.

Perfectionism is a recipe for endless dissatisfaction.

They have an almost hard-wired ‘could do better’ belief that’s probably been with them since their schooldays.

They are often scared that others might be or do better than they – which is frequently a legacy from schooldays when we were taught to compete with one another in class.

‘I’m never satisfied with what I achieve!’

She had just been told that she had successfully achieved NLP Master Practitioner Certification on our Pegasus NLP Masters Programme.

Now this is a demanding course. It’s not for the faint-hearted and not everyone on this Programme is successful first time around. Over the previous 3 months Kelly (not her real name) had participated in 16 training days, spent many additional hours working on her modelling project, made lots of presentations to course colleagues, and worked on the curriculum list of nearly 40 topics that form part of our certification assessment.

She came through with flying colours.

Shortly after receiving the good news I overheard her commenting to a colleague that she is never satisfied with what she achieves. We got chatting, because this is a quite common pattern, and it turned out that Kelly has had this perfectionism pattern for as long as she can remember.

In our chat I suggested to Kelly that she experiment with setting a new standard for herself: ‘90% is good enough!’

Her new plan is to stop when she reaches 90% success. 90% satisfaction.

And decide that this is good enough.

I pointed out that if we aim for 100% success we will forever be tweaking. We will be forever ‘nearly there’. We will be constantly seeking out the imperfections and trying to make these perfect.

It doesn’t matter whether ‘90% is good enough’ is true or not.

We can adopt it: make it true for ourselves – in many situations – and recognise that there will be situations where a higher standard is required.  And treat these as exceptions to our new rule.

And, for those who like to seek out where things would not work, yes, there will be lots of situations where the 90% suggestion would not apply!

I wouldn’t be too happy if my operating theatre surgeon was satisfied with 90% successful results, for example.  Or, if I had a boss who decided that 90% of my monthly salary was good enough.  School exams are another exception. Or precision engineering projects.

Aim to be always improving, learning

The 90% approach lets you get a lot more done because you save a lot of tweaking time.

Any project you engage in can, potentially, improve your performance.  Because, having finished the project you’ll see how you could have done it better.

Which means that next time you engage in a similar task you’ll likely be more skilful and more insightful.

You’ll also be developing the skills to work more easily, comfortably and with a lighter heart. You’re also developing confidence and autonomy: not looking over your shoulder at what ‘they’ might say or think.

This is quite different to recognising how you could have done it better – and then feeling bad about what you have achieved.

Where does perfectionism come from?

We can acquire the perfectionism trait or belief from many sources. We usually do this when very young and before we acquire the ability to decide if it is a trait we would like to have!

Then, over the years, it becomes ‘how things are’ for us: it becomes an unconscious belief which we feel compelled to adhere to.

School, parents and religious mentors are probably the most common sources for this belief.  There is also the fear of criticism which comes out of low self-esteem – if I don’t feel good about myself I’ll dread criticism and will aim to make everything I do be above criticism.

After all, if I already feel unsure of my worth, any criticism of me just adds fuel to the fire.

That’s one of the reasons perfectionists aren’t very good at finishing things: if I don’t finish it you can’t find fault in it!

Does ‘the cause’ really matter?

The cause or source of our perfectionism (and I do mean our – it’s something I’ve struggled with for years) is not especially important.

But it is useful. To know the cause, that is.

If I can recognise where I picked up this trait or belief, I can see it for what it is. It is not a reflection on my personality, on “how I am” – it is simply an un-useful lesson I learned along the way. A lesson that subsequent life experiences have reinforced. And which ‘feels real’ for me because of years or even decades of use.

Recognising its source is the beginning of loosening its hold on me. But that is not enough.

Next I need to make a decision…

30 years ago I attended a London workshop presented by NLP’s Richard Bandler.

He talked about perfectionism. And advised against it.

Bandler’s attitude was ‘you’ll never get it right – you’ll always be able to write a better book once you finish one.  Because then you are more skilled.

He offered a great suggestion: write this one first. Then write a sequel!

That way you’ll have two books instead of one!’

The 90% standard works. It results in a lot more productivity. And more fun. And peace of mind. And more freedom to experiment. More creativity. More discoveries.