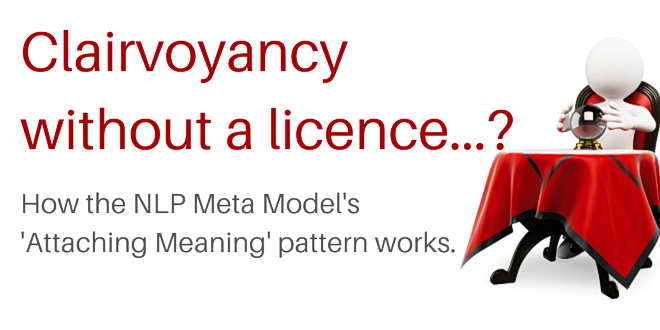 They ‘just know’ what you’re thinking and feeling...

... and there's no point in denying it!  They're not clairvoyant - they just think they are,

Take a moment to figure out what's common to these comments?

Answer: in each case the person speaking, who we’ll call the challenger, decides that she ‘knows’ what the others are thinking and feeling – simply from observing their behaviour!

They just ‘know’ your mind

And the challenger is in no doubt about it; they know they’re right – about us.

That’s why there’s no point in defending yourself. They just know what your behaviour means – they’ve read it in a book or they’re basing their challenge on observing you in the past.

This can only mean that the quiet person is in a bad mood! Their quietness could have nothing to do with the fact that they are trying to finish an urgent job or have reached a tricky point in the project?

They’re laughing at me!

Again, this could mean so many different things. Yes, it could mean they’re laughing at the challenger. Or they could be discussing a private joke.

Well, everyone knows what that means, don’t they! It’s in all the body language books.  (And the latter is, unfortunately, not far off the truth: many books on communication skills perpetuate this myth.) The reality is that lots of us fold our arms because it’s comfortable!

In Pegasus NLP we call this belief ‘Attaching Meaning’' and it's called Complex Equivalence in traditional NLP terminology. It’s one of the ‘fuzzy’ ways of thinking identified in the wonderful Meta Model which we explore on our NLP Practitioner Part 2 programme.

Each of the Meta Model patterns describes a common ‘fuzzy thinking’ pattern – a common but often flawed way of thinking that can lead to personal life problems and to difficulties in communicating with others.

In Attaching Meaning we attach our meaning, or significance, to someone else’s behaviour or body language. We, based on our own thoughts and beliefs, decide what their body language ‘means’ or signifies or tells us about them.

Then we have feelings about the meaning we attribute to it!  Weird!

How we learn to attach our meaning to their behaviour

But we learn to think like this when we’re very young. We do it by copying others who use it on us. And by our teens most of us become highly skilled in this ‘skill’.

1. You focus on someone’s behaviour, dress style, or way of speaking.

2. You then decide what this means:

Pat isn’t smiling much today; (which means) I’ve upset him

Kathie smiles too much; (which proves) she’s very superficial

My boss didn’t greet me in her usual cheerful way; (so therefore) she must be annoyed with me.

Having decided what their behaviour means so we now feel irritated or hurt by it.

(Think about it: we become irritated or hurt, not by their behaviour, but by what we decide they are thinking or feeling!)

Then we sulk, or challenge them, or accuse them of misunderstanding us, or we avoid them.

Everyone uses Attaching Meaning; some of us more frequently than others.  It’s especially common in groups of people who are familiar with one another such as families, loving relationships, friendships and with work colleagues!

And it’s responsible for a lot of relationship stress.

What to do about it?

It doesn’t feel comfortable to be told what you’re thinking or feeling especially if it’s untrue!  So, we feel hurt by the accusation and attempt to defend ourselves against the injustice - only to get into yet another argument with them.

They believe they’re right. Arguing with them will only strengthen this belief. See https://pegasusnlpblog.com/telling-them-they-are-wrong/. Fortunately, there’s a better way.

Recognise that you’re attaching your own meaning or significance to their behaviour. Now remind yourself that you have no evidence for your conclusion – it’s just a guess.  And then, if appropriate, ask them how they are thinking or feeling.

When you’re on the receiving end of Attaching Meaning

Accept it for what it is. They probably have a long-held belief that they ‘know’ how people are thinking or feeling. In this case it’s unlikely you’ll change their belief. However, if someone frequently uses Attaching Meaning to accuse you, you could ask them a clarifying question as follows:

‘You always look away when I’m talking to you – you never give me your full attention! You are disrespecting me! ‘

‘Have you ever looked away whilst listening to somebody… because you needed to think about what they’ve just said - and felt no disrespect towards them?’

Doing this once or twice isn’t going to change them. Long-held beliefs don’t change very easily.  But they are less likely to use the Attaching Meaning accusation so frequently with you in future.

(One thing, though... be sure that your clarifying question is delivered in a soft, enquiring manner. Angry or defensive retorts don’t work too well!)

It's obvious... when you can recognise it!

Once you know about Attaching Meaning the pattern begins to lose it's kick.

True, you need to remind yourself of it from time to time so you don't fall for it.  But simply understanding what's going on is empowering.  You don't have to be a victim to it - or use it to unintentionally victimise others.

Yes, it can be hurtful to be on the receiving end, especially if you don’t know recognise the pattern that they are using. It can even be infuriating, again if you don’t know how they are thinking - although now you do know what is happening:

They’re just using a very common thinking pattern which they learned at a very young age.

How we cause our own feelings: https://nlp-now.co.uk/how-we-cause-our-feelings/

Another on Attaching Meaning

The Meta Model in life coaching