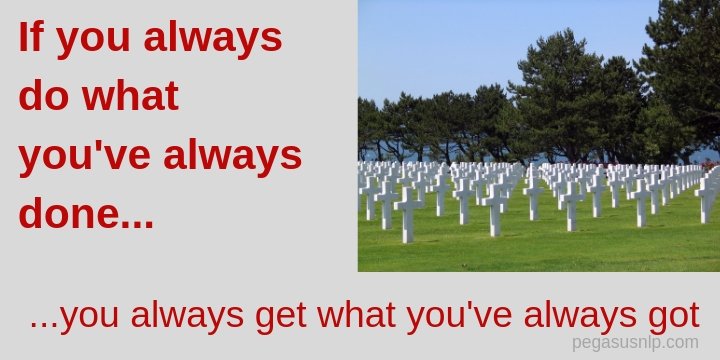 If you always do what you've always done

you always get what you've always got

By the way, the slogan is not exclusive to NLP.

It's one of the ways in which we encourage ourselves to become more adventurous and more flexible in how we deal with situations.

The slogan is often attributed to Henry Ford or to Tony Robbins but it's most likely that a counsellor from Milwaukee, called Jessie may have originated it http://quoteinvestigator.com/2016/04/25/get/)

Here in the UK today is the day on which we commemorate the official ending of World War I - when, on the 11th hour of the 11th day of the 11th month Germany signed the armistice with the Allies.

It's also the day when we remember those who died in all wars.

Out in the New Forest today we were on the final day of the NLP Core Skills programme and because it was Remembrance Sunday we agreed to take a break at about 10:55 a.m. to allow people to recognize the moment in whichever way they considered was appropriate for them.

I went for a short walk in the woodland near the Lodge where we hold our courses. And spent a few minutes walking almost ankle-deep in autumn leaves among the trees and listening to the birds. Looking out over the valley and distant woodlands.

Apart from that birdsong it was very quiet.

Then, way off in the distance, there came the sound of a volley of gunfire to mark 11 AM.

And, curiously, just at that moment a huge hawk swooped down almost to ground level about 50 yards in front of where I was standing... Right at that moment a dove might have been more appropriate, perhaps, but it was a stunning moment.

Anyway, as I walked back to the training room, I tried to imagine how the world would be if political leaders had to prove their worth rather than their wealth and cunning before they were allowed to have power.  (This was first written in November 2007...)

... to recognize the futility of war - especially wars which are aimed at changing people's beliefs.

Yes, I agree, it was just a silly fantasy...

But what a difference it could make.

George Santayana said "Those who cannot remember the past are condemned to repeat it".