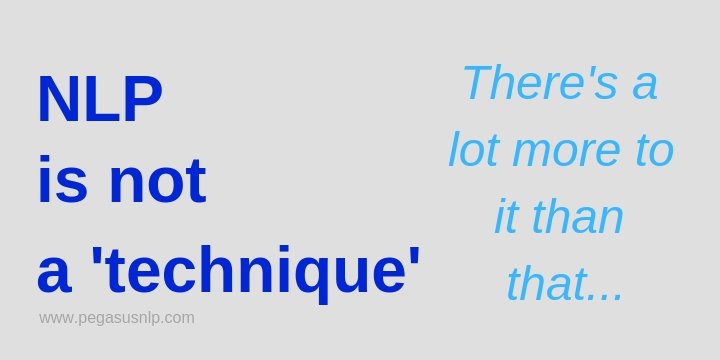 I'm amazed at the number of individuals, websites and blogs which describe NLP or Neuro-Linguistic Programming as a set of techniques or, even worse and from a recent national newspaper headline in which NLP is described as 'a technique'!

Over 40 years ago, back in the early to mid 70's, Richard Bandler, Frank Pucelik and John Grinder began NLP as a sort of meta-therapy i.e. a therapy that would have the key ingredients of successful therapies.

In doing this they 'modelled' what worked in the world of therapy; notably Fritz Perls' Gestalt Therapy, Virginia Satir's family-oriented therapy and Milton Erickson's unique approach to hypnotherapy.

(This was, of course, just the beginning and pretty soon they and their co-explorers realised that NLP had potential in many more fields than just therapy).

To do this modelling they did not use 'techniques'.

They used an attitude and a methodology.

The attitude, which became the Attitude of NLP, was one of wanting to know how things worked. Specifically, in this case, they were curious and fascinated to discover how, despite being radically different from one another, the approaches of Perls, Satir and Erikson all worked and produced very effective results.

They were also very, very systematic in how they went about studying, or "modelling" these approaches. And that's where the methodology comes in. By looking at the processes (what was actually going on at the level of structure and patterns) rather than the content (the superficial level of what these experts did and said) they were able to identify the key ingredients which accounted for their successful results.

Out of this Attitude and the application of this Methodology came a whole series of techniques including the Meta Model, Reframing, and the Milton Model.

These techniques, and the many dozens of techniques which have since been developed, are the result of the modelling process which is NLP.

Saying that NLP is a technique isn't just inaccurate - it's missing the point.

NLP is many things

- an approach to life,

- a way of looking at things,

- a way of understanding things,

- a way of thinking,

and so on and on... it's much, much richer than a technique or even a bunch of techniques.

See also the article 'What is NLP'