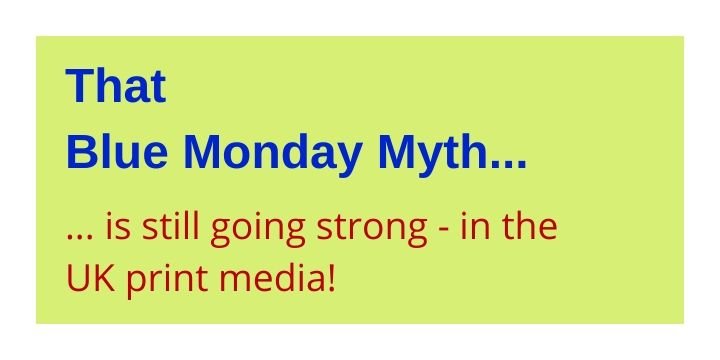 The 'official' day for feeling bad

A week ago on Monday 18 January 2011 it was Blue Monday, officially the most depressing day of the year, or so we’re told. Mind you, it could have been last Monday (25th) – no-one seems quite sure.

This was written in 2011 - but not much has changed - the UK media still drags it out and dusts it off every January.

As it happens I slipped up and forgot about both dates. On 18th I was busy exploring great things on the final week of our NLP Master Practitioner Certification Programme and clean forgot to do my bit by being miserable and supporting this new National Institution. And last Monday it just slipped my mind even though, along with their 6 million other listeners, I’d heard about it mid-week on the BBC Radio 4 Today Programme.

Now, although NLP is rightly known for its huge range of practical techniques for changing moods and communicating effectively, it should also be famed for its ability to provide us with the tools for thorough critical thinking; tools like the Meta Model, the Milton Model, the various methods of Reframing, and so on.  In fact, rather than seeing NLP is a series of disconnected tools and techniques, NLP is more appropriately seen as an attitude to living, thinking, and communicating.

So, to many NLPers having a day appointed by the new media as "the most depressing day of the year" is a bit of a challenge to their critical thinking.

And not just to NLP users, either. And their response is along the lines: "Hold on, which officials have announced this? When did they announce it? On what basis have they made this pronouncement? Is it backed by evidence or practise? Did all of the pundits agree? Is it true for everyone?"

These were questions which also occurred to me when I heard about it on the BBC Radio 4 Today Programme - which has 6,000,000 listeners.

So, as you do, I checked it on Google. And, true enough, a few minutes’ searching indicated that the "most depressing day" fact was being quoted very widely by UK national newspapers including the Daily Express, Daily Mail, Daily Mirror, The Independent, and The Guardian.

It was also quoted by the BBC website and even by the Church of England. Even a mental health charity has supported the myth: https://www.mentalhealth.org.uk/media/news-releases/news-releases-2009/13-january-2009/  (By the way, you won't find it - they have since removed this article...)

Well, how can you argue with that!

Surely if so many eminent sources quote it as a fact then it must be true, mustn't it…?

The first clue that things weren't quite as official as we were being led to believe came from this Wikipedia article. Then I came across comments from Ben Goldacre, The Guardian’s Bad Science columnist and one of my favourite myth-busters.

Helped by dedicated journalists and PR people, the 2nd or the 3rd or the 4th Monday in January has now become virtually the unchallengeable and official Most Depressing Day of the Year.

Or so it seems.

And it all started back in late 2004 as a way of getting people to book their summer holidays – courtesy of a PR company, a former part-time university tutor, a not-very-sizeable cheque, and a company called Sky Travel. (Have a look at some of the links below to get some background to this silly urban myth. And this related article in The Times Higher Educational gives interesting insight into how the PR scheme/scam works.)

A myth is born

So here we are. In our own lifetimes and before our very eyes we can see how lazy journalists give credibility and momentum to a myth. Why? Because they get paid for submitting sloppy copy on a no-questions-asked basis to lazy and over-rushed editors.

Their customers are unimportant - all that matters is filling the column inches and selling the stuff.

‘Get your facts right’?

But surely no-one publishes material without checking their facts?

Well, yes, that used to be a fundamental tenet of journalism, Nowadays news happens fast and providing it has become quite cut-throat. Newspapers are losing out to the more immediate mediums such as the internet and radio and TV. So it appears that newspaper editors, especially but not exclusively, can’t afford to be fussy - and, for the most part, the public doesn’t really care. Most are more interested in entertainment rather than news - otherwise how can we account for the success of the tabloids?

News affects moods. And financial markets. And interest rates. And politics. And legislators. And public opinion. And voting preferences.

We suffer unless we think, and challenge, and question what we listen to or watch or read. The age of the reliable news medium is past, if it ever existed; all the more reason to sharpen our critical evaluation of whatever news media we expose ourselves to - with or without the critical thinking skills and insights of NLP.

And, perhaps, it's useful to bear in mind that the news which we are supplied with will always be the individual and subjective evaluation of the reporter and the news editor. Or, as we might say in NLP, we need to check the motivation behind the action - the likely purpose behind the behaviour of the journalists and their editors - and proprietors.

(Some links have now been removed. Probably through embarrassment??)

And if you’d like to see the Most Depressing Day myth in action:

The Guardian - though they nowadays have a different view

The Church of England

The Sun (at 3 million it’s the UK’s biggest selling newspaper) (They're since removed the link.)