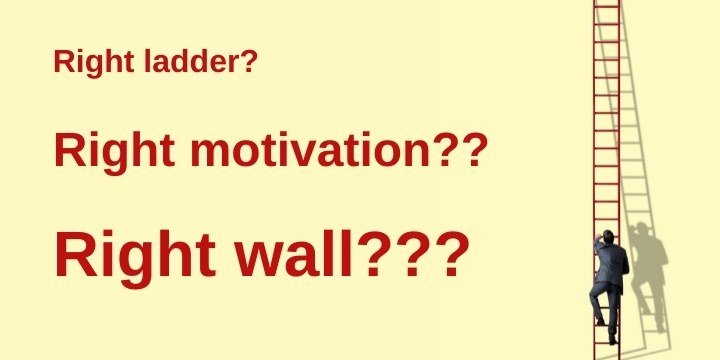 Before you climb it, ensure your ladder is against the right wall?

For years I’ve quoted Stephen Covey’s great metaphor: “If the ladder is not leaning against the right wall, every step we take just gets us to the wrong place faster.”

I actually paraphrased Covey: There’s little point in energetically and enthusiastically climbing that ‘ladder of success’ – if it’s leaning against the wrong wall!

It’s an important point:  First decide which wall you want to scale and only then lean the ladder against that wall and then start climbing.

Wasting energy – and lots of time

Makes good sense. And, once you get this point, you realise how much time people waste struggling to get ahead in life – without first deciding what they really want to achieve.

(But I had a hunch I might be quoting the wrong source. So, I did a bit of checking and found it could have been Thomas Merton, an American Trappist monk and theologian. And then I came across my now-favourite source detective, The Quote Investigator, and discovered that, although Covey made the idea famous it’s likely to have been invented by a Welsh novelist called Anne Adaliza Evans!   https://quoteinvestigator.com/2017/08/17/ladder/)

Instead of rushing about in the dark

And meanwhile…  is your ladder leaning against the right wall for you?

Take the story of Thomas Henry Huxley. He was a London biologist during the second half of the 1800s. He coined the term ‘agnostic’ and championed the work of Charles Darwin’s, among other things.

One day, realising he was late for an appointment, he rushed out of his house, hailed a hansom cab, and jumped in shouting to the cabbie ‘Top speed – I’m late!’

After a few moments, the thought dawned on him… He stuck his head out the window and shouted to the cabbie ‘Hey, do you know where I want to go?’

It’s a common trait in many one-person businesses; and even more so in teamwork: first grab an exciting idea and then enthusiastically work at it – only to later realise you haven’t fully thought things through.

By the time someone asks What, precisely, are you aiming to achieve? a lot of time, effort, and money can have been wasted.

What we are aiming to achieve needs to be carefully identified and evaluated.

A clearly defined goal is the starting point which focuses and motivates. And one useful technique for evaluating-before-acting is our NLP PECSAW model.