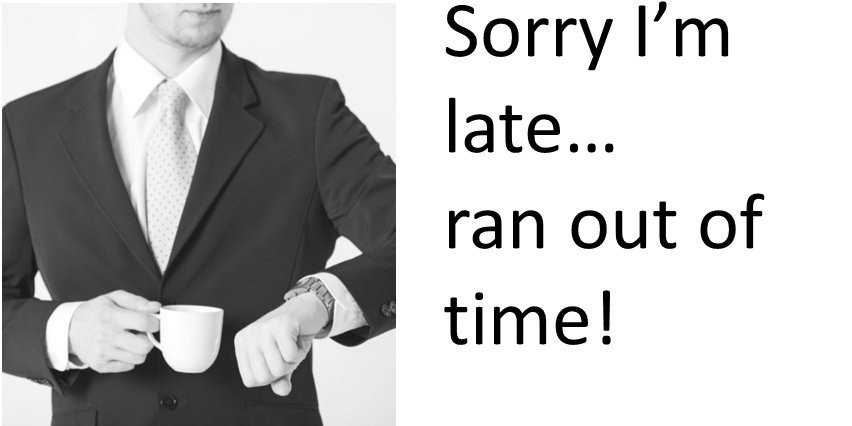 
People who are consistently late for appointments or meetings tends to share a particular trait. They don’t like waiting around – it’s a waste of time.

In their eyes arriving 5 or 10 minutes early for an appointment wastes valuable time that could be spent on other things.

So they will cram in more activities and leave setting off until the very last minute.  And, as a result, and almost inevitably, they’ll arrive late while you’ve been patiently waiting for them!

In their eyes they’re being efficient.

In the eyes of others they are being disrespectful.

‘On-timers’ always include a buffer zone

On our annual NLP Master Practitioner programme we ‘model’ or identify what’s behind how people do things.  It’s in-depth 2-day practical project in which a few people who are good at the selected skill are interviewed by teams of others to identify the precise elements that enables them to be so successful at their skill.

The month’s Modelling Project was ‘How to be on time’.  It provided some useful insights into a simple-but-valuable skill.

And one of these skills was an eye opener for some of us – including myself. I haven’t been a persistent latecomer but this is because I often have to rush furiously to be on time – with the result that it takes me some time to settle and centre myself when I arrive.

And the new skill I have gleaned has already made a difference.

What is it? People who are consistently on time always include a buffer zone in their time planning.

How to do it

Kerry likes to be on time. She considers it a mark of respect for the other person. In planning to arrive at a 2:15 PM meeting she will estimate the journey time and then some extra time as a ‘buffer zone’.

This is to allow for contingencies such as:

Her buffer zone allows Kerry to relax and arrive on-time.  And if she does arrive too early she will be just as efficient in utilising her time by, for example, making phone calls or relaxing and mentally preparing for the appointment.

On the other hand the latecomers prefer working to deadlines – and usually very optimistic deadlines, at that.

For example, let’s say Matt has to meet someone across town. His journey involves getting from his office on the 5th floor to the car park, driving 25 minutes across town, parking his car, and then getting to where the meeting is being held.

In his optimistic planning, Matt will typically only estimate the 25 minutes travelling time. He will ignore the time required for the other parts of their journey: ‘that’ll only take a few moments – and I can always shave a few minutes off the trip when I get going’.

Latecomers like Matt make a virtue out of not wanting to waste time.

Apart from the fact that their fine-tuning means they are always living on the edge – with barely time to breathe – they miss out on one key point: they may not like wasting their time – but they don’t seem to mind wasting other people’s time — which is what happens when they arrive late.

(Written in October 2011 and later edited)

Posted in NLP in the Workplace and tagged appointment, being late, latecomers, meetings, NLP, wasting time