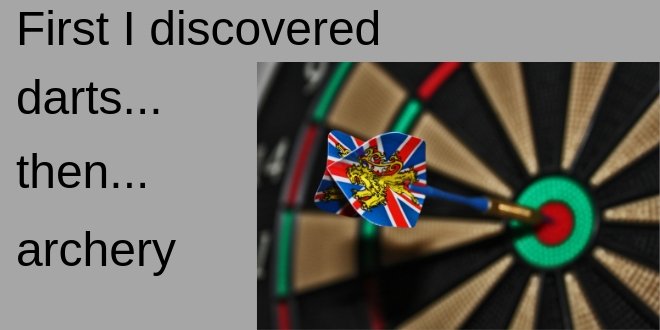 We were chatting about the next day’s archery session during this week’s NLP Practitioner training and, as can often happen in such conversations, I had a personal insight - I made a link between archery, darts and my life in general.

When I first came to England I discovered the game of darts.  It was a great way of spending an evening while enjoying a relaxed pint or two with friends. Yes, they did have darts in some Irish pubs but not nearly to the same extent as here in the UK where, at the time, virtually every pub had a dartboard.

Despite having no experience in the game I discovered I had a ‘natural talent’ for playing darts. I was pretty successful... for the first few weeks.

And then things went awry.  I gradually became quite hopeless at the game – almost to the point where hitting the dart board at all, let alone hitting the spot I wanted to hit, was considered successful.  My natural talent quickly evaporated – and this had nothing to do with the number of pints of beer I was drinking.

So I gave up darts and have never returned to the game.  I decided ‘I’m no good at darts’ and, in doing so, created a new belief, for and about myself…

There are a lot of similarities between the two games – darts and archery.  The archery target is bigger but then you stand much further away from it.  In archery you have a bow and arrow instead of a small dart.

In both games the objective is to hit a small section of the target with a limited number of arrows/darts per round. The skills are similar, too. After your first shot you adjust your aim to get nearer to the bull’s-eye.  And if you over-adjust the dart or arrow goes too far in the other direction.

It’s because of this skill and its parallel with how we approach targets and goals in our daily lives that we integrate Archery sessions into our NLP Practitioner Certification courses.

So the link I made in that chat about the following day's archery session...

When I took up darts, and much later took up archers, I was delighted with my initial skill, my beginner’s luck.

So much so that I was determined to replicate it - especially with darts.  So I began trying really hard to hit the right spots on the target. But I wasn't playing anymore. I was working hard at it.  And the harder I worked at it the worse I got.

‘I had beginner’s luck because I approached the game with a sense of relaxed fun – let’s replicate that state and attitude and I might just be able to return to my initial skill.’

My new belief was about my personality rather than about my attitude to the game and my need to practise.

Trying too hard makes us mentally and physically tense. And it’s usually driven by a ‘get it right – don’t make stupid mistakes’ attitude.

On the other hand people who approach projects with a sense of fun and experimentation - and who focus on the activity rather than the result - seem to develop their skill easily and quickly.

Now that I’ve made these connections I could start playing darts again, I suppose…

If I could find a pub which still has an accessible darts board. The snag is that darts isn’t good for business in today’s pubs. Dart players aren’t profitable. They are there to have fun rather than to get drunk. They linger too long over each pint. And the game takes up too much profit-making floor space.

As a result the few pubs which still have a dartboard now attract dedicated players and it’s not easy to have a go if you’re just a casual, not-very-good player.

In his book Outliers Malcom Gladwell says we need 10,000 hours practise to become an expert. I think I’ll invest my 10,000 hours elsewhere. The difference now is that I’m no longer ‘no good at darts’ – just someone who became too serious about a game and therefore who gave up too quickly.

More importantly I’ll now be watching may approach to other projects; ‘am I using fun and experimentation – or trying too hard to get it right?’

(Oh, and much the same thing happened with archery...  Got too serious. Tried too hard.  But... I still have a go on some of our NLP sessions... just for the fun of it.)

There is a related article on our main website: https://www.nlp-now.co.uk/archery.htm