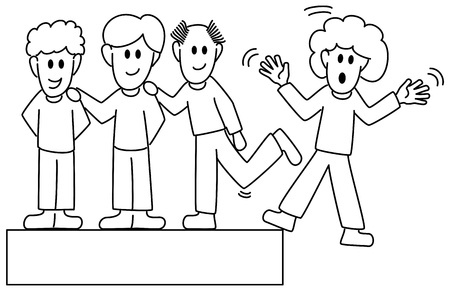 Petty People like to divide and conquer – to play the ‘enemies and allies’ game.

So, obviously they are best avoided?

Well, yes.  Most of the time you can simply stay out of their way, especially in your social circles, in your neighbourhood, or even in your extended family.

But there is one area where this is not possible - where there's no easy escape route.

Where you can be trapped.

And that is your place of work. This is where you can spend around 1 in 5 of your waking hours! And where you have to attend whether or not you like the other people there.

Most of go to work to do a job and to get along with our colleagues. Many of us even enjoy our jobs.

But Petty People play a different game - especially in the workplace.  They're not interested in being nice to, and getting along with, work colleagues.

Rather like the playground bully at school, if you're not in their gang and agreeing with them you're the enemy. So they tend to:

What to do about Petty People at work

Usually when there are communication difficulties, we first aim to improve our own communication. And then we negotiate with the other person.  And this often works for reasonable people, but rarely for Petty People.

Why? Because they seek power rather than affiliation. They get their kicks out of their "divide and rule" games.

So what options are left?

Well, you can approach the HR people - if the organisation has one. Or speak to a senior manager or the owner.

And if this doesn't work look for a better job...

(Yes, you can follow the legal route. And in the case of serious victimisation or harassment this is often appropriate. The downside is that it takes a long time - and you are losing years of peace of mind in the meantime).

Find a better place to work

Life is too short to put up with this sort of unpleasantness for such a significant portion of your week – each week – month after month - for up to 1 in 5 of your waking hours.

Do your job-hunting strategically; don't simply walk out.

Happily, once you have made the decision to look out for an organisation that will better appreciate you, it's easier to ignore or tolerate the pettiness: because you know you're not going to go on forever.

And, in the meantime, don't reward the petty people by responding to them. Don't descend to their gamesmanship.

Treat them as unhappy people - to be pitied... (See this Newsletter article called Pity Petty People for some of the different types of Petty People and their impact - and for tips on handling them.)