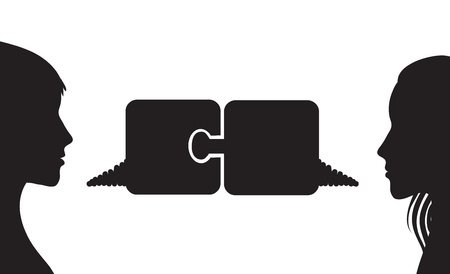 Rapport is a skill which some lucky people 'pick up' naturally. And which most of us have to learn and work on to hone our skill.

But the investment of a little attention and perseverance in this skill is worth it.

She was quick! Normally I'm quicker than most. But her performance knocked the socks off mine!

This was today in Sainsbury's supermarket and I was packing as she scanned the items.

Initially she was as focussed and mechanical with me as she had been with the woman in front of me, putting the stuff through the scanner at an amazing rate.

Now I take pride in my packing ability but I had to admit I'd met my match. So, slightly frustrated with her speed and in admiration of her efficiency, I laughed 'Okay, I give in - you've beaten me - and not many do!' A look of initial shock - then interest - then she laughed!

But, not to be totally beaten I trumped her by getting in first with 'No Nectar card, thanks! And I don't need school vouchers!' (Okay, it may sound a little sad, but these moments can be important in supermarket shopping and queuing and, well, just think of the alternatives!)

Then I joked 'Do you find yourself waking up in the night mumbling 'Have you got a Nectar Card? Do you want school vouchers?' Or saying things like 'Would you like a cuppa tea? Got your Nectar Card?'

So we got into swapping more unlikely scenarios (while waiting for the machine to read my debit card) and she volunteered examples of how this auto pilot process kicks in in other areas of her life.

A frivolous and quite unproductive few minutes, which didn't delay the queue, but which enabled us to establish rapport and be human and real with one another. I left laughing and she seemed to have enjoyed the interaction, too. (Although when she got home she was probably talking about 'that strange man I met at the checkout today!')

We experience the two quite differently. When people are interested in our views or experiences they will typically respond, while we are speaking, with nods and with interested and animated expressions and with encouraging comments such as 'Oh, really' or 'Uh, huh'.

They rarely interrupt except to ask for further detail or explanation. When you've finished speaking they'll ask clarifying questions or compliment what you have said with their own views or experiences.

The result of this 'loop', in which we are feeding messages backwards and forwards between one another, is that the rapport gets better and better as your interaction proceeds. It's an easy, effortless, uncontrived, comfortable, and quite natural process.

Sorry.. What's that you said? Didn't hear you!

... you probably know what it's like when you're with someone who is quite uninterested in you or your views or experiences!

As you are speaking they look at you blankly, if at all.

They rarely make encouraging sounds or movements. And the moment you stop they jump in and begin telling you about their experience. Then they become animated and enthusiastic and probably maintain fairly sustained eye contact with you.

But if you attempt to do other than talk about their subject they change - and the change is often quite dramatic and even unsettling.  You get The Treatment: they become quiet, the eye contact is reduced, they become still, any comments they make are perfunctory or are made with a distracted tonality.

You are being conditioned!

Now you're getting no encouraging feedback on what you are saying. Without, perhaps, knowing they are doing it they are engaged in what old school Behaviourists call 'operant conditioning'.

Their lack of interested signals or encouraging responses will likely have the effect of what the Behaviourists call 'extinguishing the behaviour' i.e. deterring you from continuing to talk (about your views).

You don't get 'strokes' for talking about your views. And pretty soon you run out of enthusiasm for your subject or even for talking at all. Then, with a 'what's the point' inner sigh, you stop talking and dutifully listen to them. (In NLP terms, they are attaching negative anchors to your attempts to talk about your views).

So what are the discouraging signals?

Lack of acknowledgement: when you are speaking they don't make encouraging sounds and their expression is blank.

Impatience: as you're speaking they make lots of impatient sounds to hurry you along: 'Uh, huh' or 'Yeah. Yeah. Yeah'. These are usually made in a brisk, clipped 'Oh, just get on with it' tonality.

Expression: while you are speaking they tend to break eye contact a lot - or adopt an impassive uninterested look.

Preoccupied behaviour: what they do, what they say and the sounds they make suggest they really cannot find anything of interest in what you are saying

Body language: They will often fidget or shift their position a lot. This can be accompanied with lots of fast 'hurry up' head nodding that is not really in synch with what you are saying.

Jumping in: if you pause to take a breath, for even a millisecond, they jump in with their own comment and then take the conversation off in a different direction. This is often done with a slightly higher tonality to discourage you from interrupting.

Dismissing your views: This can be unsubtle, as in 'I really can't agree with that nonsense!'. More likely, it will be done subtly and non-verbally through the tone or volume or expression with which they follow your contribution..

Incongruence: if they do show interest in what you are saying it won't 'ring true' - their non-verbal behaviour does not match/support what they say somewhat along the lines 'Oh, yes, very interesting' ...emmm...quite...'

What are the encouraging signals?

These will tend to be the opposite to the discouraging signals and include:

Some people become very still when they are genuinely interested in what you are saying - others become quite animated in their genuine responses to your description.

Encouraging facial movements such as raising or lowering eyebrows.

Head nodding but in a different way to the 'hurry' nodding - this time the nodding is in agreement and indicates they are following you.

Congruence: their non-verbal signals match and support what they say are saying  - and indicates that they are genuinely interested.

(Neither of these lists is comprehensive. Add your observations in the comments section at the end of the accompanying blog article.)

Let me tell you about me!

They want an audience! And you'll do, for now...

'Meet people in their model of the world'

This is one of those important NLP Principles which sounds good but doesn't make a huge amount of sense.

In our little interaction in Sainsbury's I was meeting her in her model of the world.

I wasn't doing it as a technique; I was genuinely interested in how the repetitive nature of her work carried over into other areas of her life. (In the dim and distant past I. too, have had few jobs which were very repetitive and mentally un-demanding - so it fascinates me how people handle such situations.)

Had I been 'making conversation' our little chat would have been completely different... and that's a key difference between real rapport and technical rapport.

(1) How people relate with you:

Notice which of your friends and colleagues are genuinely interested in you and which of them use you as an audience or fan club.

This may offer clues as to which ones to spend more time with - and which to spend less time with.

(2) How you relate with people:

Consider the level of rapport that you create with others. Are you really interested in them? In our NLP courses we explore how you can use the Time Line and other methods to develop and enhance this genuine interest in others.

However you can also develop this on your own by aiming to discover what it is like to walk in other peoples shoes. This interest, if it is sincere, will create natural rapport - without having to resort to the more mechanical techniques such as matching body language.

I once came across a comment which went along the lines 'everyone is my superior in some ways - everyone is an expert in something I know little about'.

This attitude could be a good place to begin developing this interest in what makes people tick...