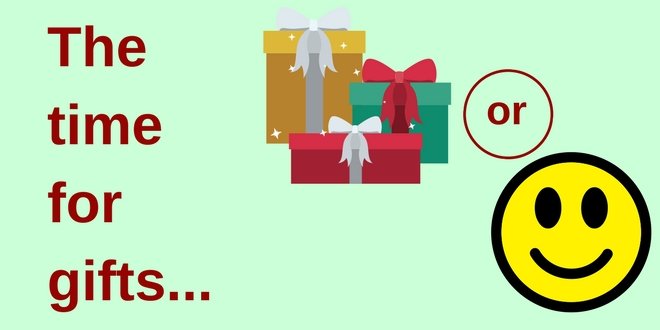 She was carrying two large shopping bags in one hand and an even larger bag in the other hand.

As she passed, she was talking continuously, half to herself and half to the others, in a strained and urgent tone.

They said nothing: the husband and two teenage sons.

Right now, we're into that pre-Christmas time when a lot of people get into a frazzle about buying presents. Because buying gifts for family and friends has traditionally been very important at this time of the year.

So they’re rushing about with lists of things to buy so they can give the right gifts to the right people.

Meanwhile, these other people are doing the same – rushing around trying to find presents for the people who are, right now, buying them presents.

So lots of people are getting stressed because they want to find the perfect gifts to make one another happy.

Why do we give presents?

For a number of reasons:

It’s what you do…

I just like seeing their face when they open it

Well, they’ll be giving me a gift so I better get one for them

So, apart from the occasional bit of giving-to-avoid-guilt, most of us give presents because we want others to feel good. And so that seeing how pleased they are will make us feel good.

Is there a better way?

The objective of presents is to make people feel good though showing how we feel towards them. But if we only do it through presents we only get to make them feel good occasionally such as on birthdays or religious or national holidays. And it costs money.  And it’s confined to family and friends.

And gift-giving often makes people feel indebted to us: they now have to give us a present in return and, though this is rarely mentioned, a present of similar value!

But, what if we were to make people feel good all year round? Just for the hell of it? And in a way that doesn’t make them feel they have to give us something in return?

There is. You make them feel good by how engage with them.

It’s easy, it’s enjoyable and it’s also a great way of having a conversation and keeping a relationship fresh and fun.

Giving gifts to everyone

Use the tips in everyday conversations to make people feel good just for its own sake... and because making others feel good can make you feel good, too.

The tips fit together nicely, take just a few minutes and, as an added bonus, you may find that people are a lot more interesting that you thought.

(1) Give them your full attention

We rarely give people our full attention. Usually only we’re half-listening, preoccupied, distracted, self-conscious, trying to impress, wondering what to say next, and so on.

In other words we’re focusing on us – not on them.

You pay attention to them, fully.  Even if it’s only for a few minutes.  And you do this when they are doing the talking, which is often the challenging bit because this is when our attention drifts.

You are not glancing about, or checking your phone, or texting, or thinking about the next thing you’re going to do when you can get away from this person, or wondering about your next meal.

For just few minutes you pay attention to this person and their story - and nothing else.  Think about it… each day you’re awake for over 1,000 minutes. So giving 5 or 10 of these to someone isn’t going to make a big hole in your day.

And giving someone your full attention leads into the next tip…

‘Well, surely you’re either interested or you’re not!  I mean, you can’t make yourself interested, can you?’

Well, there’s an interesting thing about many people. Especially the interesting ones (as opposed to the boring ones – who think everyone is interested in them.)  The interesting people don’t ‘sell’ themselves very well. They doubt anyone is really interested in what makes them tick and what interests them.

Tip of the iceberg

So they only give us the tip of the iceberg - the superficial ‘social’ stuff.  People become interesting when we find out what’s below the surface. And to get to this you have to dig just a little deeper. Not a lot. Just ask for a little more information about something they say.

On our NLP courses we do an exercise where one person gets to talk to another about favourite hobby or interest or pastime.  The listener has a series of questions to ask for more information.  Both parties know that it’s a structured exercise – it’s a set-up.  Yet within about 3 or 4 minutes the conversation is flowing easily.

The world has plenty of talkers – and not nearly enough genuine listeners.  People who will really listen are few and far between.

Yet developing a genuine interest in people and listening to their views and stories really does make them feel good – and not just because they so rarely get a chance to talk to a real listener.

Another nice thing about developing this habit of being interested in a person and wanting to hear about their views and experiences is that it sort of sucks us in.  They become more interesting.

We become interested in what’s going on for them – and forget about what's going on for ourselves.  It may begin as a deliberate act but then the listening takes over.

By the way, this is also a great way of alleviating the “what will I say next” worry that a lot of us have in chatting with strangers.  Asking for a little more information helps you become more interested in what they are talking about – and also gives you time to think about what you’re going to say next.

Note: Don’t pry. Respect their privacy.  There is a big difference between wanting to know more and prying into their personal lives.  How do you know when you’re delving too deeply?  Usually because you get non-verbal signals that they are reluctant to go into things in any detail.

(3) Pay them a (sincere) compliment

Everybody has points you can compliment them on. Appearance, mood, personality, things they've done, and so on. Select something and tell them you like it.  Many will brush off the compliment - in a sort of  'Aw, shucks...' way - because many of us aren't too good at accepting compliments or praise.

But they'll still be secretly pleased. Most people are, if we're honest. And we usually treasure such sincere compliments.

Do these tips really work?

Yes, and they work very well together.

When you first begin using this approach it may slightly feel artificial or even manipulative.  That’s because it’s unfamiliar – and because you are aware of what you’re doing.

It’s a bit like folding your arms the ‘wrong’ way around. Try it – the first time it’s positively awkward. Do it this way for a day or two and it becomes ‘natural’.

This way of engaging with people could easily become an enjoyable habit. Using these tips can change your own mood, too, because you can get sucked into the other person’s good mood, story or memory.

Using this approach doesn’t have to be instead of tangible presents!

It can be an added extra.

And one that you can give to anyone - even someone you don't know.