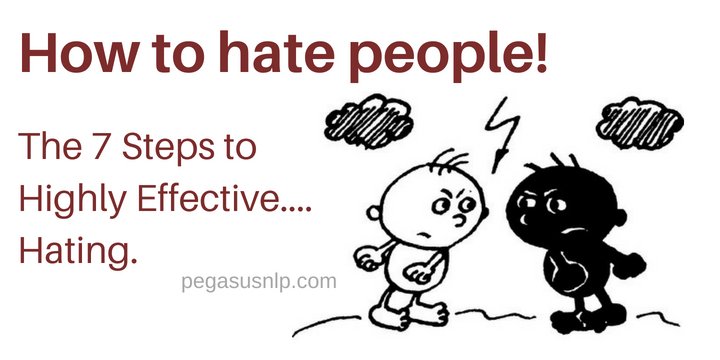 NLP is often perceived as a collection of powerful self-help techniques.

It is. But it’s a lot more than this.

Right at the core of NLP is something called modelling. NLP modelling is the ability to identify the steps a person uses to do something; whether this is a useful skill or one which gets in their way.

We’re not born with it. Babies don't pop out of the womb hating others. They have to learn how to do hate.  So hating people is a skill – which can then become a habit that we learn and develop and fine-tune and reinforce!

We all know how to dislike

We’re all able to momentarily dislike someone for whatever reason. But this usually passes pretty quickly and, later, most of us even see the funny side of our disliking.

But the skilled hater doesn’t let it go.

They keep the hatred going continue to fuel their hatred over years - and even enlist supporters to their cause.

Back in the early 2000s I posted an ironic look at the results of modelling 'how to hate' in the NLP Newsletter. This is a second look at the ‘skill’ and includes a longer list of 'how to' steps.

1. Don’t get to know your opponent

This is important because if you get to know someone you could easily be side-tracked into seeing them as humans like yourself and even as likeable.

2. See them as a group – not as individuals

Dehumanise your targets. So they become a ‘them’ – a group – the enemy. If you allow yourself to see them as individuals there’s a risk that you might begin to recognise what life looks like through their eyes. Definitely a serious risk to your hatred.

3. Get media support for your hatred

Find websites, newspapers or influential people that share your views. Knowing you’re not the only one who feels this way is very supportive.

5. Keep it simple with 'black-and-white' thinking

Decide that there are absolute standards of right and wrong. And that you are right and 'they' are wrong. This is easy since you don’t have to think – you know you’re right so you stick to your guns(!)

Emotional thinking also blocks critical or objective thinking. So you need to get very worked up about your cause – lots of reading and, especially, viewing of supporting evidence. And if you can share this with others it’s even more effective since you can work each other up.

This is an easy one. Let's say you want to hate, say, Purple People… Look for two or three vivid examples of a few Purple People acting badly and decide that this is typical of the whole group. Now you just ‘know’ they’re all evil or bad or a waste of space.

8. Get people to disagree with you!

This is subtle but is actually one of the best ways of believing in your cause. So be challenging about your views so ‘ordinary people’ disagree with you. Now you can argue with them. And the more often argue to defend your stance or prove they’re wrong the more you strengthen your own belief!

Be sure that you do all the talking if people disagree with you. Raise your voice. Shout if necessary (it brings in #6 above). This is important because if begin listening to supporters of your opponents this could undermine your certainty. (Incidentally, if you want to model some experts in this skill watch how politicians handle TV interviews.)

10. Goad them into over-reacting

This is a great technique but does require a high level of skill. However you can develop this skill by watching confrontations on TV. Notice how the provocateur gets their opponent so frustrated that they lose their cool. How? By refusing to answer direct questions, being patronising, and ‘talking over’ them.  And then, when the opponent finally loses it and becomes aggressive, the provocateur only needs to sit back, calmly look at the audience or camera, and shrug…

This is not a complete list (though it's a bit longer than the original 2002 article) but it’s a good start in the unlikely event that you really need help in hating...

It might also provide clues into the tactics of individuals and groups who encourage and spread hatred. And, just maybe, identify some early warning signs of that activity in our own thinking.