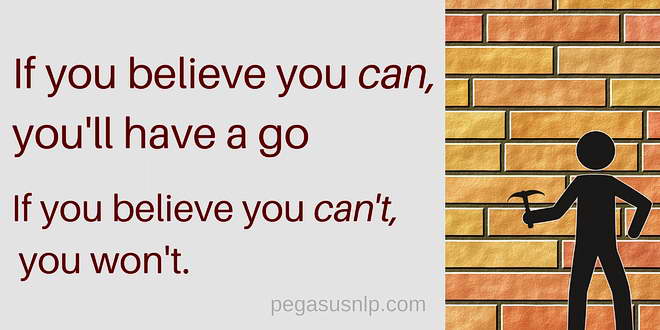 When they are faced with a challenging situation, some people are happy to have a go. They accept there is no guarantee of success, but they’re willing to give it their best shot. Because they think in ‘possibilities’.

Faced with the challenging situation, other people have a quite different reaction: ‘No, it’s impossible – I can’t do this!’ They reject the new or the unfamiliar.  They are reluctant to have a go at something that’s out of the ordinary.  They practise Impossibility Thinking.

They live quite a different life to the Impossibility people - they are prepared to experiment, to try out new things, to learn new skills, and they are continually expanding their Comfort Zone by experimenting and stretching themselves.

They think “I can!” They don’t know, for sure, that they can but they’ll act as if they do – they’ll have a go. And if things don’t work out, they’ll feel pleased that they’ve given it a shot.

They want a comfortable life. They see no point in taking risks – including the risk that things won’t work out, causing them to feel disappointed.  So they avoid activities that are unfamiliar, they perceive challenges as risky, and they like to stay within their Comfort Zone – and, as a result, their Comfort Zone continually shrinks.

Along with some great ideas, the ‘positive thinking’ movement has latched on to a few daft ones.

It’s widely used, unquestioningly, by inspirational or motivational speakers and pops up in most NLP trainings and workshops.  (The quote, by the way, is usually attributed to Henry Ford - although the concept is a bit older than that.)

But it does sounds good! It has a good ring to it. And most people, like myself, when they first hear it think it’s great.

So is it really a daft idea?

Let’s take the first part “if you believe you can  … you’re right!”  Well, no matter how strongly and enthusiastically I believe I can fly without wings, or walk on water, neither is going to happen?  Gravity is going to defeat the would-be flyer and, well, it’s better to walk in water that attempt to walk on it.

It takes more than a positive belief to succeed.

For example, let’s say Jackie is a 33-year old sports fan of sports TV. She has spent years immersing herself in inspirational-thinking books, videos and workshops. After attending her latest ‘breakthrough’ workshop she decides that she is going to ‘aim high’ and become a 100 mtr world champion.

Positive beliefs such as this are inspiring and exciting. And they need to be accompanied by sound reality checks. And the reality for Jackie is that, although she believes ‘I can do it’, she is not right: at 33 she will not have the physiology nor the skills that world class sprinters begin developing from a very young age.

That said, she can turn her life around and become a great runner in a few years – just not a World Champion Sprinter.

So what about the bit “If you believe you can’t … you’re right”? It’s true - once you decide that something is impossible, then it is. For you.

This part of the quotation is important since it relates to how we approach lifes opportunities and challenges:

I can’t get that job

I can’t deal with failure

I can’t stand up for myself

This is Impossibility Thinking in action.  In each case, what they say reflects what’s going happening on the inside - they have created a virtual ‘brick wall’ between themselves and the possibility to doing it!

And, here’s the important bit, once this Impossibility Thinking kicks in they won’t even think about changing – it’s a done deal!

The “I can’ approach to planning a holiday

You’re thinking about going on a special holiday. You’ve chosen your ideal destination, done some research, and viewed it online. And you begin investigating the practicalities.

Do you have the free time?

Is your friend or partner prepared to come with you?

Can you raise the money?

Problems arise immediately: you can’t arrange the time off work, there’s not enough money, or it doesn’t fit the timetable of those close to you.

But let’s say you’re a Possibility Thinker. You have the ‘I can do this’ attitude. You’re undaunted by the setbacks and obstacles. Yes, it seem unlikely but you decide it is going to happen: I can do this!

Because of this, your mind begins looking out for ideas, strategies and information that will make it happen. So you do lots of research. You talk to people. You make calculations. You negotiate the time or the money or arrangements.

And, all the while you’re doing this, one thing is constant: I can do this – it’s just a matter of how.  This continues until you succeed...

…or have to give up because, despite your hard work and enthusiasm, it’s simply not going to work out, at least not this time around. And, yes, of course you’re disappointed. But this soon passes and you get on with life – knowing you’ve given it your best shot.

‘Setting yourself up for disappointment!’

Some people criticise this approach as being unrealistic and that such people are just ‘setting yourself up for disappointment!’

Possibility Thinkers don’t care. They’re not afraid of disappointment – because for them, the win is in the having a go!

How does Possibility Thinking work?

People with the ‘I can’ attitude see life’s possibilities.

They believe they can achieve things... until experience proves otherwise. They need to ‘have a go’. They thrive on testing things out.  As a result, Possibility Thinkers get things done and make things happen in their lives.

How does Possibility Thinking work? Once you decide something is possible for you, your mental filters begin searching for ways to make it happen!

You develop a sort of ‘goal-focussed antenna’.  As a result you automatically tune into opportunities, and people, and ideas, and information that are relevant to your goal.

With this antenna or filter operating you continually refine the vision of our goal - and on the route towards achieving it.

Not only that, but because you are actually doing something – rather than merely thinking about it – you are developing practical experience as you progress and as you continually adapt what you do to take you towards your goal.

You accept that there are no guarantees, but you are moving and exploring. And if things don’t work out you learn from this experience and move on to the next one. And you congratulate yourself on having a go.

How we do ‘I can’t’ thinking

Deciding that you can’t do something is great!

Why? Because you can relax! There’s no need to change. No need to make an effort. No need to step outside your Comfort Zone. https://nlp-now.co.uk/outside-comfort-zone/.

Sticking to the same old routine is safe and easy. And, once we decide that an idea is impossible, we reinforce our decision with our self-talk:

‘I’m not the kind of person who could do something like that’.

That sort of thing may be okay for some – but not me.

‘I’m too old, too young, too weak, to poorly educated, too busy, too set in my ways’.

The ‘I can’t’ decision is both effective and disempowering. With it you create a sort of brickwall between you and the opportunity. You are on one side and the opportunity is on the other side of the wall - it’s  out of sight and out of mind. Very effective.

Because of this, and unlike the Possibility Thinker’s approach, you no longer think about it. So you don’t experiment with the idea, you don’t look for ways to make it happen - there’s no point! It’s a done deal – it’s on the far side of that wall!

How to loosen Impossibility Thinking

Impossibility Thinking is just a habit. We gradually acquire the habit of reacting to newness with an instant ‘I can’t’ response.  And it’s often age-related – many people become less adventurous with each succeeding decade, often beginning in their twenties.

But, since it’s just a habit, we can loosen it - by challenging it firmly and frequently, until this reduces its grip.

Become aware of the Impossibility Habit

Habits work because they are automatic – they operate out of conscious awareness. One of the simplest ways of loosening a habit is to become very aware of it. Make it more conscious and less automatic.

Do this by noticing each and every time you slip into Impossibility Thinking; each time you think or say ‘I can’t…’ or ‘I could never …’

Think of the consequences of the Impossibility Habit

Each time you catch yourself doing Impossibility Thinking, consider the consequences. You’re about to put an opportunity out of your own reach - on the far side of that virtual brick wall.

And this will guarantee you’ll never do it. Ever.

And the more you do this with new ideas and opportunities the easier and more habitual it becomes. Consider the kind of future you are creating for yourself.

Require yourself to come up with supporting evidence for the ‘I can’t’ decision.

Sometimes the answers to these questions will convince you that your Impossible decision was right for you. That’s fine; you now know that it was carefully considered rather than a habitual response.

Sometimes you’ll discover that your ‘I can’t’ really means ‘I can’t be bothered’. Again, this is fine, too. You have considered it and decided that it is really not worth the effort – that doing something else is more attractive.

And, often, you’ll discover that you’ve simply got out of that wonderfully stimulating ‘let’s have a go’ attitude. And that this has become part of your way of life.

Yes. You just need to be quietly and steadily persistent. We’ve been teaching people to loosen the Impossibility Thinking habit on our NLP courses for decades – and methods like those above do work, if you stick with them for a month or two.

Bear in mind that it’s not about having a ‘Yes, I can’ approach to everything. That would be a bit silly.

It’s about replacing the instant, habitual, gut-response of ‘I can’t’ with ‘I can’… until I prove otherwise, through testing it!’

Believing you can do it doesn’t guarantee you’ll succeed – only that you’ll give it your best shot.

But, believing you can’t almost certainly guarantees you will not succeed – because you’ve just put the idea on the far side of that brick wall.

So, the old saying could be more accurately worded:

If you believe you can, you’ll have a go.

If you believe you can’t… you won’t!

From the Pegasus NLP Newsletter