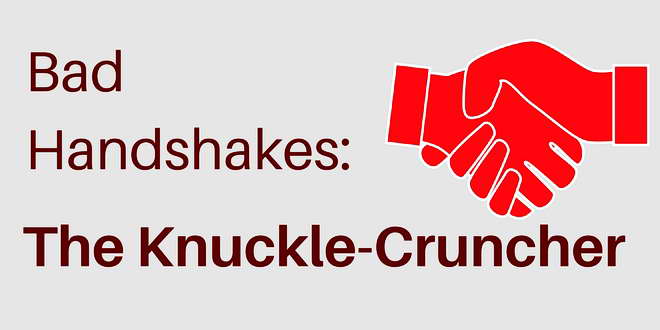 I want to impress you - desperately!

We’ve all been there. You’re introduced to someone. You quite innocently reach out to shake hands with them. Then you experience near-agony as they apparently try to crunch the bones of your hand into amush!

This is usually done by an oh-so-sincere Alpha Male (and, not-unusually, an Alpha Female) who seems to be trying to come across as a sincere, would-be-acquaintance, but also wants you to be impressed with the strength of their grip/character – as if these two were somehow connected.

Too bad if you happen to have an injured hand, have arthritis or some other health condition, or if you simply want to exchange a polite and gentle greeting.

They have an agenda and that’s all that matters.

Very few Bone Cruncher operatives (it's sometimes called a Knuckle Cruncher) deliberately set out to inflict pain. In my experience Bone Crunchers tend to fall into one of three categories:

Just in case you might not be sufficiently impressed by the pain they’re causing, some less-secure Bone Crunchers will use additional techniques such as The Submission Twist, The Space Invader, The Limpet and The Elbow Dive. More about these in later articles.

What to do about Bone Crunchers

Funnily enough, the solution to most Alpha tactics is to let it go – ignore it!

In NLP we act as if a person’s actions are simply the external demonstration of their internal attitude towards themselves and towards other people. In other words they may sincerely have good intentions towards you. And they are trying their best, however sadly, to impress you.

So, while you bravely deal with the pain in your hand, you can decide what sort of relationship you want with them despite their clumsy handshake.

If you really do feel a need to react one of the best tactics is to make a jocular comment, perhaps along the lines “Well, that’s a very strong handshake – you must be drumming up business for your favourite chiropractor!”

So how strong should you grip their hand? As a very general rule, and using one of the NLP Rapport principles, you could match the strength of their handshake (unless, of course, they’re a Bone Cruncher.) Another suggestion is to use the same strength you’d use on the handle when opening a door.

(See also the article on what makes a good handshake)

(A version of this article was published in June 2014 and has now been re-written.)