We were 4½ hours into the first day of NLP Core Skills in the New Forest, returning from the Low Ropes Course, when one of the site managers came over to ask a favour of Katie, one of our group. She was camping rather than staying in the Lodge as her family were going to join her for a few days and her large tent was pitched about 100 yards away. 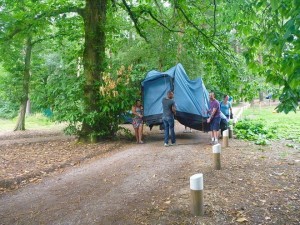 The tent is en route

For some of the year Avon Tyrrell has camping spaces and with the current heatwave coinciding with the start of school holidays tent spaces were nearly all taken. Nick from Avon Tyrrell said a big group of adults with kids were seeking space for a very large marquee-type tent – and would it be possible for Katie to move (though it was fine if she didn’t want to)?

She immediately agreed. And just as immediately our whole group sprang into action! No one organised anything. Yet within minutes a spot was selected just across from the Lodge and under a tree so the tent wouldn’t be too warm in the mornings for the little ones. Some decided to clear the space under the tree of twigs and pine-cones. And a broom appeared. 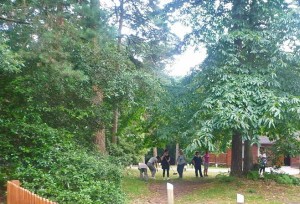 Meanwhile more of the group, including Katie, had already cleared the heavy stuff from the tent and were carrying the still-erected tent to its new spot. (I just had time to snatch a few shots.) Then the baggage followed. And less than 20 minutes after starting we were all sitting around chatting and having our coffee break.

Why did it happen?

It really was a great example of no-leader teamwork. And by a group of 16 people who didn’t know one another a few hours previously. Why did it happen so spontaneously and work so efficiently? We did chat about our experience afterwards but have not yet explored it in depth (the course is still on-going). However there’s no doubt in my mind that the reasons are many and complex. And, based on previous experiences of this phenomenon on our courses, I’d guess the following may have been involved: 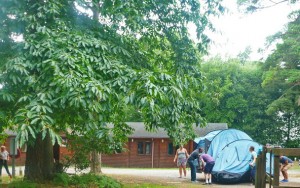 Stop for a moment

Teams work better when members choose to be part of the team. And people on our NLP courses have usually carefully evaluated the NLP courses available and have opted to be on a very different type of NLP training – so they tend to have certain qualities in common.

The low-key way in which we do things on the course and the absence of formality or hierarchy evoke a no-risk sense of fun and engagement.

We give a lot of attention on Day 1 of NLP Core Skills to activities which evoke a great team spirit: this includes our team-oriented Low Ropes Course session which we do just after lunch.  The idea behind this is that if you get the Relationship side of things right the Task  side (i.e. learning and exploring) is much easier and more fun.

It’s fun to pull together

The concept of adults having genuine fun, whether this is at work or in learning or even at play, is much-derided by the school-of-hard-knocks sceptics. Which is sad – for them. Because when a group of adults enjoys pulling together and is free of ego games it often develops a no-problem approach to challenges in which it really is fun to pull together and explore together. 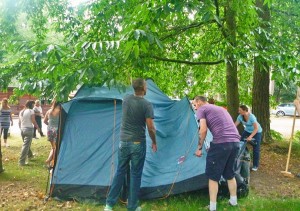 When team members are neither required nor encouraged to compete with one another this ‘pulling together’ usually happens spontaneously. And this is an opportunity missed by so many organisations: the ones which talk a good talk about how ‘we’re all part of a team’ – and then go on to kill this ideal by requiring people to compete with one another for career advancement!

And the key ingredient!

And, of course, the key ingredient… people who take part in Pegasus NLP courses are just great people!

The Apprentice: when teamwork isn’t teamwork