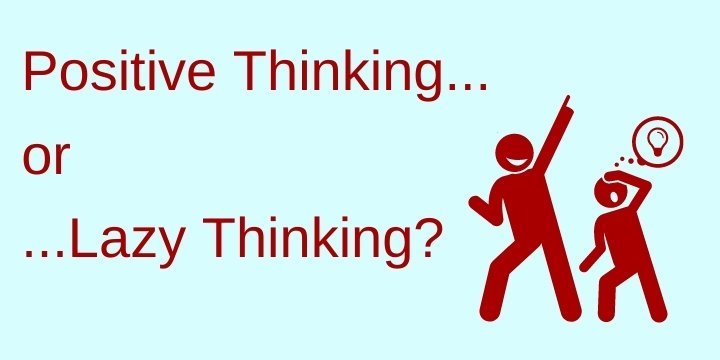 Have you noticed that much of what’s promoted as ‘positive thinking’ is really lazy thinking or even, let’s face it, daft thinking?

It’s something that’s bothered me ever since I was got caught up in my own fuzzy buzzy phase a few decades ago.

Yes, I fell for that Group Think: ‘the experts know best’ belief for a while – from the late 60s to about the mid 70s, in fact. And like many others I spent a lot of time and energy and money attending workshops, presented by a variety of New Age and positive thinking gurus, most of who were from outside the UK and who had come here to tell us what to think.

In those early days it was fun and exciting. And warm and fuzzy. Because you got to know the other fans of the different groups – and made new friends and felt, well, valued and belonging to groups of people who shared your own values. Or appeared to.

Yet it gradually (very gradually) dawned on me that us fans and followers were suspending our critical thinking ability in order to fit in with and be part of the crowd.

There were things you did and things that you didn’t do.

There were things that you said and that you didn’t say.

There were lots of unspoken ways to “be cool” which, if you didn’t adhere to them, could result in your being shunned.

And one of the things that you didn’t do was ask awkward questions of the presenters.

The Group Think was that they knew best. They were the all-knowing experts so you listened and accepted and absorbed and believed.

You did not question them.

People who asked questions were disruptive.  They punctured the fuzzy bubble. They brought the cold wind of critical thinking into the warm and cosy group atmosphere.

People like me, in fact. As I gradually returned to thinking for myself and asking awkward questions of the leaders.

This didn’t make me popular

The group leaders did not like being challenged.  Because one persistent questioner was enough to puncture the happy, clappy bubble. And their style of leadership needed this bubble to ensure people would sign up for the next workshop or course!

So, as the questioner, I became less popular with the different group leaders or presenters or experts. And this disapproval was recognised by the rest of the group.  And I realised that I could go with the flow and have lots of ‘friends’ – or think for myself and have fewer Friends!

And that’s why our Pegasus NLP courses have always celebrated critical thinking.

It’s why, since the mid 90s, participants on our courses are invited to be active participants; to ask lots of questions, to think critically. and to be challenging.

It’s why our Pegasus NLP by-line states We respect your intelligence, your individuality, and your integrity.